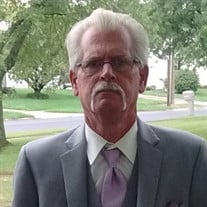 Jeffrey “Jeff” Evan Marvin, 62, passed away on Thursday, February 17, 2022 at St. Vincent Hospital in Indianapolis, Indiana. He was born in Lebanon, Indiana on June 23, 1959; a son of the late William and Catherine (DeMougin) Marvin. He was a 1978 graduate of Lebanon High School. Jeff was married to Dana (Woodard) Marvin in 1981; they later divorced, and she survives. Jeff was employed with INDOT of Indiana as a traffic technician for 37 years. He loved his family. In addition to family, Jeff enjoyed boating, fishing, cookouts, working on electronics and computers. One of his favorite loves was his sidekick, Bella. Jeff was a good friend to all who knew him and will be deeply missed. Survivors include his daughter: Bianca A. Salvatore of Lebanon; granddaughter, Laeklyn Salvatore of Lebanon; brother, Douglas A. Marvin of Lebanon; sister, Elaine A. Courtney of Lebanon; many nieces and nephews. In addition to his parents, Jeff was preceded in death by a brother, Donald E. “Don” Marvin and one nephew, Douglas A. Marvin, II. Visitation will be held from 4:00 to 7:00 p.m. on Wednesday, February 23, 2022 at Myers Mortuary, 1502 North Lebanon Street in Lebanon, Indiana. Funeral Services will be at 2:00 p.m. on Thursday, February 24, 2022 at the funeral home in Lebanon. Interment will be held following services at Browns Wonder Cemetery in Lebanon. Memorials may be made in his memory to Crohns & Colitis Foundation: 733 Third Ave., Suite 510, New York, New York 10017.

The family of Jeffrey E. Marvin created this Life Tributes page to make it easy to share your memories.

Send flowers to the Marvin family.