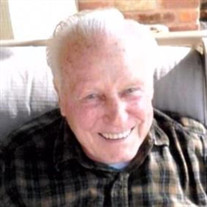 Mr. Marven James “Jim” Woodard, 90, passed away at his home in Lebanon on February 21, 2021. He was born in Danville, Indiana, on December 25, 1930, a son of the late Harley and Merle Woodard. Jim attended schools in Lebanon. On August 18, 1952, he was married to Deamie Kathryn (Wethington) Woodard in Frankfort, Indiana. She passed away on April 15, 2014. Jim was a skilled, self-employed painter and was owner and operator of a stock car with his son, Eddie. In addition to his loving family, he enjoyed mushroom hunting, fishing, gardening, going to races and working on old cars with his son. Survivors include his five children: Edward James “Eddie” (Vickie) Woodard of Lebanon, Cindy (Bob) Williams of Lebanon, Marcia Ford of Lebanon, Dana (Jeff) Marvin of Lebanon, Kathy Alexander and fiancé, Artie Edwards of Lebanon; six grandchildren, Elizabeth (Bruce) Burtner of Thorntown, Tanya Woodard, fiancé, John of Lafayette, Dainty (Chad) Revell of Lebanon, Bobbie Williams, Jr. and companion, Brandi of Lebanon, Bianca Salvatore of Lebanon, Tilka (Andrew) Folden of Lebanon; several great grandchildren. In addition to his parents and wife, Jim was preceded in death a daughter, Lisa Woodard and a sister, Mary Reagan. Funeral Services will be held on Thursday, February 25, 2021 at 2:00 p.m. at Myers Mortuary, 1502 North Lebanon Street, Lebanon, Indiana. Visitation is planned for Thursday, February 25 from 11:00 a.m. until the time of service at the funeral home in Lebanon.Interment will follow services at Center Cemetery east of Lebanon, Indiana. Memorials may be made to charity of the donor’s choice.

The family of Jim Woodard created this Life Tributes page to make it easy to share your memories.

Send flowers to the Woodard family.