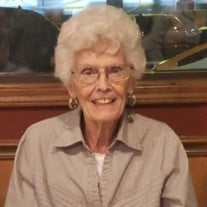 Mrs. Elizabeth “Joan” Copeland, 92, passed away peacefully with her loving family by her side, at her home in Lebanon on Sunday evening, January 2, 2022. She was born near Dover in Boone County, Indiana, on March 6, 1929, a daughter of the late William Raymond and Mary Gladys (Harlan) Lowe. A life-resident of Boone County, she was a 1947 graduate of Dover High School. On July 3, 1947, she was married to John William Copeland in Lebanon, Indiana. He preceded her in death on December 7, 2020. Joan had a strong work ethic, starting at the age of 13 where she worked at Mitchell & Berry Drug Store in Lebanon. She then was employed for twenty years at the Lafayette Square Sears. In 1989 she retired and after a few months of retirement she became an employee of Land Title in Lebanon where she worked for nine years. Her memberships included the American Legion Post #113 Auxiliary, V. F. W. Post #910 Auxiliary, and Lady Elks, all of Lebanon. Joan loved family gatherings, and Easter was her absolute favorite! She also enjoyed reading, bowling and visiting with friends. Her grandchildren and great grandchildren were everything to her. She was their biggest fan, supporting them through 4-H, and all their sporting, and academic events. Survivors include her three children: Jama (Dr. Pat) Doolan of Lebanon, John D. (Kim) Copeland of Lebanon, Jennifer Copeland of Lebanon; ten grandchildren, David (Alyssa) Harrison of Michigan, Lindsey (Greg) Robertson of Lebanon, Erin (fiancé, Mark Stacey) McCandless of Lebanon, Nikki Farris of Indianapolis, Makayla Copeland of Lebanon, Jacob Copeland of Lebanon, Madison Copeland of Lebanon, Alyssa Toney of Wadsworth, Ohio, Nicholas Toney of Wadsworth, Ohio, Miriah (fiancé, Cody Louks) Merrill of Frankfort; nineteen great grandchildren. In addition to her parents and her husband, Joan was preceded in death by three brothers, John Robert “Bob” Lowe, William Jacob “Bill” Lowe, James Edward “Jim” Lowe; and two sisters, Mildred Boyland and Josephine Clements; and one special little sister, Sally Paddock. Funeral Services are planned for 1:00 p.m. on Friday, January 7, 2022, at Myers Mortuary, 1502 North Lebanon Street, in Lebanon, Indiana. Streaming of the service can be viewed on the Myers Mortuary Facebook page at the time of service. Visitation will be held from 11:00 a.m. until the time of service on Friday at the funeral home in Lebanon. Interment will follow services at Lincoln Memory Gardens in Whitestown, Indiana. Memorials in Joan’s memory may be directed to American Legion Post #113 or the VFW Post #910 of Lebanon.

The family of Joan Copeland created this Life Tributes page to make it easy to share your memories.

Send flowers to the Copeland family.