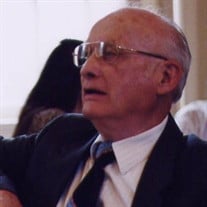 John William Hicks, 94, passed away at Homewood Healthcare in Lebanon, Indiana on Friday, March 19, 2021. He was born on February 26, 1927 in Lebanon; a son of the late Roy M. and Opal (Campbell) Hicks. On August 7, 1949 he was married to Mary Jane (Wright) Hicks in Lebanon. She preceded him in death on April 19, 2011. John served his country honorably as a sergeant in the U.S. Army during WWII. After the war he returned to complete high school and graduated from Lebanon High School in 1948. He attended Butler University. He was a member of First Baptist Church of Lebanon. John worked for 29 years at Stewart Warner until its closing. He then worked at Lau Industries retiring in 1992. He was an avid bowler for over 48 years and served as league secretary for 30 years. He was a member of the Bowlers Hall of Fame. His membership included the American Legion Post 113 where he served as finance officer and VFW Post 910. John leaves behind three daughters: Suzi L. (Russell) Whitis of Lebanon, Joyce A. Garman of Lebanon, Jan L. (David) Lawson of Bainbridge, Georgia; seven grandchildren, Jay Alford, Shawnna Hiatt, Dustin Kersey, Micah Kinnaman, Kreig Kinnaman, Kiel Kinnaman, and Eric Kinnaman; many great grandchildren, along with several nieces and nephews. In addition to his parents and his wife, John was preceded in death by three brothers, Robert E. Hicks, Roland Hicks, and Jesse P. Hicks; three sisters, Mary J. Haney, Rose Lewallen, and Jacqueline Crane; and a son-in-law, Steven Garman. Graveside services are planned for April 24, 2021 at 1 p.m. at Oak Hill Cemetery in Lebanon. Myers Mortuary and Boone County Crematory have been entrusted with his cremation arrangements. Memorial contributions may be made to the First Baptist Church or Charity of the donor’s choice.

The family of John William Hicks created this Life Tributes page to make it easy to share your memories.

John William Hicks, 94, passed away at Homewood Healthcare in...

Send flowers to the Hicks family.