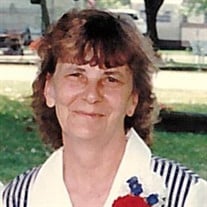 Judy Davis, 76, passed away on Tuesday, May 5, 2020 at Witham Memorial Hospital in Lebanon, Indiana. She was born April 18, 1944 near Jackson, Michigan, one of fifteen children to the late Charlie and Grace (Farwyke) Hinton. On June 29, 1963, she was married to Ammon Jearl “Sonny” Davis in Thorntown, Indiana; he survives. Judy had attended schools in Jackson, Michigan. She moved to Frankfort, Indiana in 1963 to visit her sister and during that time she met Sonny at a dance. The settled in Thorntown and then moved to Lebanon in 1983. Judy had worked in the laundry department of Countryside Nursing Home in Frankfort, Thorntown Textile Company, and for a period of time at the Christian Retirement Park in Zionsville. She retired from Kauffman Engineering after many years of service. Family was everything to Judy. She loved attending all of her children and grandchildren’s activities. She enjoyed sewing, crocheting, and camping. Survivors include her husband, Sonny Davis of Lebanon; two children, Ammon Jearl Davis, Jr. and wife, Kayla of Warsaw and Judy Thorn and husband, Michael of Lebanon; five grandchildren, Ammon Jearl Davis, III, Brittany Miller, Breanna Burcham, Jared Fawley, and Jonathan Fawley; eleven great grandchildren; two brothers, Don Hinton of Jackson, Michigan and Jim Hinton of Myrtle Beach, SC; and several nieces and nephews. In addition to her parents, Judy was preceded in death by seven brothers, Charlie, Edward, Frank, Fred, Tom, Irvin, and Roger; and five sisters, Rema Henman, Grace Wessel, Ethel Cole, Patricia Reames, and Diane Slay. Private Funeral Services are to be held Friday, May 8, 2020 at Myers Mortuary, 1502 North Lebanon Street, in Lebanon, Indiana. Boone County Crematory has been entrusted with her cremation following services. Graveside Services will take place at Lincoln Memory Gardens at a later date. Memorials may be directed to the Boone County Cancer Society, 117 West Elm Street, Lebanon, IN 46052 or to the American Heart Association, 6500 Technology Center Dr., Suite 100, Zionsville, IN 46077.

Judy Davis, 76, passed away on Tuesday, May 5, 2020 at Witham Memorial Hospital in Lebanon, Indiana. She was born April 18, 1944 near Jackson, Michigan, one of fifteen children to the late Charlie and Grace (Farwyke) Hinton. On June 29, 1963,... View Obituary & Service Information

Customized sympathy cards. Mailed for you.