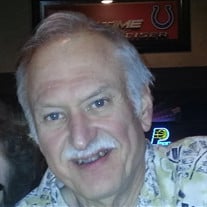 Kevin Eugene Ryan, 63, of Indianapolis, Indiana, passed away on August 6, 2019, at IU Methodist Hospital in Indianapolis. He was born on February 27, 1956 in Indianapolis, Indiana, a son of Oran Eugene Ryan and the late Betty Jo (Anderson) Ryan. He was a 1974 graduate of Lebanon High School. Following high school he graduated from Purdue with a Bachelor’s degree in Computer Science as well as an Electronics Engineering (EET) Associate’s degree. While attending Purdue he worked at Follett’s Bookstore in West Lafayette. Kevin was a lab technician for United Technology Corporation over 17 years. He also worked at Stuart Warner in Lebanon and Indianapolis, Electro Coating Company in Lebanon and was also self-employed as a technical editor and did editing with computer books. On May 5, 1984, he was married to Diane Marie (Miller) Ryan. They enjoyed 35 loving years together and she survives. He attended Eagle Creek Grace Bible Church in Indianapolis and was a member of the Military Officer's Association of America. Kevin enjoyed camping in Minnesota and Canada, hiking, trains, computers and staying up to date with the latest technology. He was an avid Chicago White Sox and Bears fan and valued his time with family and friends. Survivors include: Wife: Diane Ryan of Indianapolis Father: Eugene Ryan of Lebanon Several aunts, cousins, brothers-in-law, sisters-in-law, nieces and nephews Funeral Services will be held on Saturday, August 10, 2019, at 1:00 p.m., at Myers Mortuary, 1502 North Lebanon Street, in Lebanon, Indiana, with Pastor Aaron Woodruff officiating. Visitation will be held from 10:00 a.m., until the time of service on Saturday, at the funeral home in Lebanon. Interment will follow services at Oak Hill Cemetery in Lebanon. Memorials may be given in Kevin’s memory to American Liver Foundation, 39 Broadway, Suite 2700, New York, NY 10006, 212-668-1000.

The family of Kevin E. Ryan created this Life Tributes page to make it easy to share your memories.

Send flowers to the Ryan family.