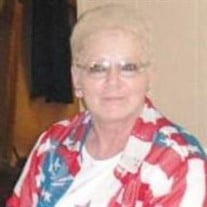 LaReata May Bevard, 76, of Lebanon, Indiana, passed away Monday, June 22, 2020 at St. Vincent Hospital in Indianapolis, Indiana. She was born in Indianapolis, Indiana on March 4, 1944, a daughter of the late Harry and Opal Johnson. LaReata graduated from Ben Davis High School. On July 1, 1960 she was married to William “Bill” Warren Bevard; he survives, they would have shared 60 years together this July. She was a devoted wife, mother, and grandmother. LaReata worked at Burger Chef (now Hardee’s) in Lebanon years ago, she also worked for Economy Insurance Company in Lebanon, but most of her life she was a homemaker. She attended the Whitestown United Methodist Church and was a member of the American Legion Post #410 Auxiliary in Whitestown, Indiana since 1984. LaReata enjoyed sewing, crocheting, needlework, and spending time with her family. Survivors include: Husband: William Bevard of Lebanon Children: Carl (Kelly) Bevard of Thorntown Angela (Robert) Glendenning of Indianapolis Laura (Fred) Moody of Lebanon Eleven Grandchildren Eighteen Great Grandchildren In addition to her parents, LaReata was preceded in death by one son, Robert Allen Bevard; sister, LaNora Miller; brothers, Carl Johnson, Charles Johnson and one great grandchild. Funeral Services will be held at 5:00 p.m. on Friday, June 26, 2020 at Myers Mortuary, 1502 North Lebanon Street, Lebanon, Indiana. Visitation will be held from 3:00 p.m. to 5:00 p.m. on Friday at the funeral home in Lebanon. Inurnment of ashes will be held at a later date at Lincoln Memory Gardens in Whitestown, where she will be laid to rest by her son. In lieu of flowers, memorials may be made in her memory to the American Legion Auxiliary P.O. Box 162, Whitestown, Indiana 46075. Myers Mortuary and Boone County Crematory have been entrusted with her care.

The family of LaReata M. Bevard created this Life Tributes page to make it easy to share your memories.

LaReata May Bevard, 76, of Lebanon, Indiana, passed away Monday,...

Send flowers to the Bevard family.