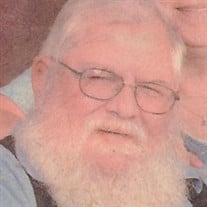 Larry Joe Perryman, Sr., 74, passed away on Tuesday, September 7, 2021, at Witham Memorial Hospital in Lebanon, Indiana. He was born in Kokomo, Indiana, on March 9, 1947, a son of the late Robert Gene Perryman and Norma Jean (Dwyer) Duncan. He was a 1969 graduate of St. Joan of Arc High School in Kokomo. Following high school, he served his country honorably in the United States Army during the Vietnam Era. On June 3, 1966, he was united in marriage to Virginia Delores (Briles) Perryman in Lebanon; she survives. They had shared 55 loving years together. He was a meat cutter with Standard Grocery and IGA, specializing in Black Angus freezer meats. He then went to work in the printing department with the Lebanon Reporter and later in Indianapolis with ad printing and print communications for 30 years; retiring in 2009 due to his health. Larry held memberships with the Moose Lodge #1269 and Thursday Night Bowling League, both of Lebanon. He enjoyed playing Euchre, hunting, and fishing. He will be fondly remembered for his love for family and his humble nature. Survivors include: wife, Delores Perryman of Lebanon; children, Larry Joe Perryman, Jr. and wife, Deanna of Lebanon, Tina Marie Ramilo and husband, Damien of Lebanon; eleven grandchildren, Brooke, Alexa, Robert, Colton, Joey, Conner, Cameron, Jackson, and Nevaeh; three great grandchildren; brother, Mark Allen Perryman and wife, Susan of Richmond, Virginia In addition to his parents, Larry was preceded in death by two sisters, Pamela Kay Whitacre and Cecilia Ann Lewis. Memorial Services with military rites are planned for 11:00 a.m. on Saturday, September 18, 2021, at Myers Mortuary, 1502 North Lebanon Street in Lebanon, Indiana. Visitation will be held from 9:00 a.m. until the time of service at the funeral home in Lebanon. Boone County Crematory was entrusted with his cremation arrangements. Memorials may be given in his memory to the Wounded Warriors Project, P.O. Box 758516, Topeka, Kansas 66675-8516.

The family of Larry J. Perryman Sr. created this Life Tributes page to make it easy to share your memories.

Send flowers to the Perryman family.