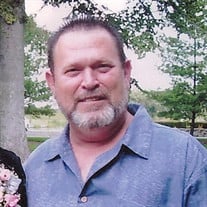 Mr. Larry Gene Shaver, 65, passed away on Friday, March 25, 2022, at Witham Memorial Hospital in Lebanon, Indiana. He was born in Aurora, Illinois on May 23, 1956; the son of the late Kenneth Edward and Clara Mae (Jenson) Shaver. Larry... View Obituary & Service Information

The family of Larry Shaver created this Life Tributes page to make it easy to share your memories.

Send flowers to the Shaver family.