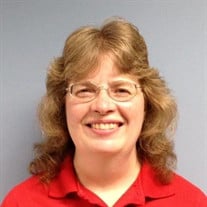 Linda S. Stum, 57, of rural Lebanon, Indiana, passed away on Thursday, May 18, 2017, at Witham Memorial Hospital in Lebanon, after a courageous 15 month battle with Inflammatory Breast Cancer. She was born on December 1, 1959, in Lebanon, Indiana, a daughter of Harry B. “Bing” and Ann Stum. Linda was a 911 dispatcher for over 20 years. She had started with the Zionsville Police Department and then worked at the Boone County Dispatch Center. For the past 13 years, she worked dispatch for Clinton County; retiring in January 2017. She twice received the Indiana Sherriff’s Association Dispatcher of the Year award, once for Boone County in 1997 and the other in 2009 for Clinton County. She was of the Methodist faith, and through the years, had attended Whitestown United Methodist Church, Milledgeville United Methodist Church and Salem United Methodist Church. Linda loved all animals, especially cats. She loved reading, watching her favorite television shows, and mowing the grass. The family would like to thank each and every one who supported Linda throughout her courageous battle. Funeral Services are planned for 1:00 p.m., on Tuesday, May 23, 2017, at Myers Mortuary, 1502 North Lebanon Street, in Lebanon, Indiana, with Pastor Gina Kirkland, officiating. Visitation will be held from 10:00 to 1:00 p.m. on Tuesday at the funeral home in Lebanon. Interment will follow services at the Zionsville Cemetery in Zionsville. Survivors include: Parents: Harry B. and Ann Stum of Lebanon Sister: Brenda L. Stum of Lebanon In lieu of flowers, memorials may be made in her honor to Humane Society for Boone County, P.O. Box 708, Lebanon, Indiana 46052 or to the Salem United Methodist Church, 6701 South 775 East, Zionsville, Indiana 46077.

Linda S. Stum, 57, of rural Lebanon, Indiana, passed away on Thursday, May 18, 2017, at Witham Memorial Hospital in Lebanon, after a courageous 15 month battle with Inflammatory Breast Cancer. She was born on December 1, 1959, in Lebanon, Indiana,... View Obituary & Service Information

The family of Linda S. Stum created this Life Tributes page to make it easy to share your memories.

Send flowers to the Stum family.