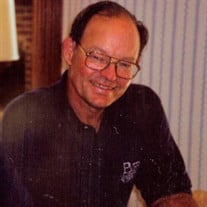 Lloyd Emil Nordstrom, 77, of Lebanon, passed away on Sunday, June 14, 2020 at Witham Memorial Hospital. He was born in Chicago, Illinois on May 9, 1943, a son of the late Lloyd M. Nordstrom and Myrna G. (Lydig) Nordstrom. Lloyd was a 1961 graduate of Mt. Ayr High School. He later received his bachelor’s degree from Purdue University and master’s degree from Valparaiso University. He honorably served his country in the U.S. Army during the Vietnam war. On August 16, 1968, in DeMotte, Indiana he married Audrey (Evers) Nordstrom; they shared 51 loving years together, and she survives. Lloyd taught for a period of time in Lowell, Indiana and served on the school board of Kankakee Valley in Wheatfield, Indiana. He later owned and operated Evers Farm and Greenhouse in DeMotte, Indiana. Lloyd loved his family immensely and cherished all the memorable family gatherings. Survivors: Wife: Audrey Nordstrom of Lebanon One Son: Aaron (Emma) Nordstrom of Lebanon Three Grandchildren: Luke Nordstrom of Lebanon Mark Nordstrom of Lebanon Leah Nordstrom of Lebanon Two Sisters: Connie (Mike) Overmyer of Culver, Indiana Susie (Dean) Norwich of Culver, Indiana Many Nieces and Nephews In addition to his parents, Lloyd was preceded in death by one son, Matthew Nordstrom; Funeral Services will be held at 3:00 p.m. (eastern time), Thursday, June 18, 2020, at Grace Church, 3001 Elm Swamp Road, Lebanon, Indiana 46052 with visitation from 1:00 p.m. until the time of service at the church in Lebanon. In addition, Funeral Services will also be held at 11:30 a.m., Friday, June 19, 2020 (central time), at American Reformed Church, 1021 South Halleck Street, DeMotte, Indiana 46310 with visitation from 10:00 a.m. to 11:30 a.m. Interment will follow Friday services at Holland Cemetery in DeMotte, Indiana. In lieu of flowers, memorials may be directed to Bridges International Ministries by Campus Crusade (Cru).

Lloyd Emil Nordstrom, 77, of Lebanon, passed away on Sunday, June 14, 2020 at Witham Memorial Hospital. He was born in Chicago, Illinois on May 9, 1943, a son of the late Lloyd M. Nordstrom and Myrna G. (Lydig) Nordstrom. Lloyd was a 1961... View Obituary & Service Information

The family of Lloyd E. Nordstrom created this Life Tributes page to make it easy to share your memories.

Lloyd Emil Nordstrom, 77, of Lebanon, passed away on Sunday,...

Send flowers to the Nordstrom family.