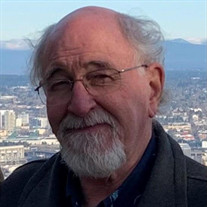 Lyman Alan Beckley, 72, of Spokane Valley, WA passed away suddenly on December 6, 2020 in his home. Born on Dec. 21, 1947 in Greencastle, Indiana, Alan was the son of Lyman Anson Beckley and Virginia Belle Adamson. Though he lived his latter years in Spokane Valley, WA Alan spent the majority of his life in Indiana, most prominently Brazil, Terre Haute, and Indianapolis. Alan graduated first from Indiana State University in 1974 and 1975 with both B.A. and M.A. in English, and completed his J.D. at Indiana University School of Law (Indianapolis) in 1993. From 1968-1972, Alan served in the US Navy as a Mandarin Linguist in the Pacific during the Vietnam War, during which time he received a presidential citation for his achievements. After his service and prior to the completion of his J.D., Alan spent his working life in publishing, including being the owner and publisher of the Macksville Gazette in 1982-85. Afterward he worked at Fiserv in corporate law, though his passion was for family law, and he generously provided legal assistance to friends and acquaintances. He also spent a number of years working as a Court-Appointed Special Advocate and Guardian ad Litem. After retiring he and Anne provided downsizing and estate sale assistance to seniors transitioning from their long-time homes to other retirement living through Caring Transitions Inland Northwest which serves Spokane County, WA and Kootenai County, ID and the surrounding areas. Alan married Anne (Sutton) on April 27, 1985 in Lebanon, IN, who survives. He is also survived by his three children, Phil, Colin (Nikki), and Ben; grandsons Jackson and Bennett Beckley; sisters Carol Sue Jack (Howard) Stitt and Lucinda Beckley; Mother- and Father-in-law William and Doris Sutton, numerous cousins, nieces, and nephews. Preceding him in death were his infant children Nicholas, Christopher, Gregory, and Madelaine, his parents, sister Barbara Ann, and brother Phil. As an avid fan, it was common to see Alan glued to the screen of any IU basketball game. He was also a hobbyist of many stripes, including trains, sailboats, classic barns, and NASCAR. Above all else, though, Alan was ever the book enthusiast, reading at any chance he got. He will surely be missed, not only for his wit, his humor, and the quiet, subtle ways he showed his love, but for the times spent buried in a book. The funeral mass and celebration of life will be Saturday, June 19, 2021 at 12 p.m. at St. Joseph Catholic Church in Lebanon, Indiana. Burial of Ashes will follow at St. Joseph Cemetery in Lebanon. Memorial contribution suggestions include: Saint Meinrad Archabbey, donor’s favorite library, or donor’s favorite veteran’s organization.

Lyman Alan Beckley, 72, of Spokane Valley, WA passed away suddenly on December 6, 2020 in his home. Born on Dec. 21, 1947 in Greencastle, Indiana, Alan was the son of Lyman Anson Beckley and Virginia Belle Adamson. Though he lived his latter... View Obituary & Service Information

The family of Lyman Alan Beckley created this Life Tributes page to make it easy to share your memories.

Send flowers to the Beckley family.