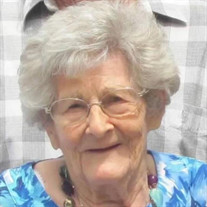 Madge Justine Lamberson, 95, Lebanon, Indiana, departed this life and went to be with the Lord on November 28, 2020. Born August 22, 1925, in Hamilton County, she was the fourth child born to the late Roy Basil and Cleo Velma (Shady) Davis. Madge attended Kirklin High School, alongside her 7 brothers and sisters. Her first job was working as a waitress at Turner’s City Restaurant in Kirklin. She and two of her sisters later worked at Kutz Drug Store in Kirklin, which is where she was introduced to her husband, Milo. After dating for a few short months, they were wed on December 17, 1944, in Kirklin Christian Church parsonage by Reverend V.G. Gilbert. Milo and Madge eventually moved to a 160-acre grain and livestock farm in Clinton Township where they started their family and raised cattle, chickens and hogs. They lived there for 17 years before buying an 80-acre farm of their own. Each year, Madge planted, cared for and canned vegetables from her huge garden, which she was very proud of. Milo and Madge were married for 57 years before his passing on April 16, 2002. Madge never met a stranger and absolutely loved to cook. Throughout her life, she worked as either a waitress or a cook until her retirement in 1986. In addition to her first two jobs, she also cared for Milo’s aunt until her death. She later became a cook at Elizaville Elementary School, then a waitress at Dorothea’s Coffee Shop in Lebanon. The last years prior to her retirement, she worked as a cook and managed the kitchen at Horsey’s Family Restaurant in Lebanon. She gained many friends throughout her working years and treasured those friendships immensely. When working at Horsey’s, she could be found there every Tuesday night frying chicken and serving homemade noodles on Thursdays. Even after her retirement, people would approach her around town and praise her for her gift for cooking. During the holiday season, her family looked forward to her homecooked meals. Her specialty was homemade chicken and noodles, which she continued to make from scratch until the age of 92. After retiring, Milo and Madge moved to Lebanon. She enjoyed having a larger home to host holiday gatherings for their growing family. In her free time, Madge spent her time gardening, working in her yard, and working fill-in puzzle books. She loved the Lord and enjoyed listening to gospel music. She had attended Lighthouse Baptist Church in Lebanon to worship. One of her favorite and more recent memories was when she and three of her sisters were able to attend a church service together. Madge was a loving mother, grandmother, sister, aunt and friend. Family was very important to her. She enjoyed watching her family of five grow to over 20 members and they each brought such joy to her life. She strongly believed in education and was proud when a granddaughter or great-grandchild made the Honor Roll or excelled to higher education. Madge will be deeply missed by her three children Alicia Bevington, Sandra (Jim) Bramblett and Mike Lamberson, all of Lebanon; three granddaughters, Kim (Stephen) Bishop of Sheridan, Jill (Jon) Achor of Lebanon and Courtney (Jake) Harreld of Fishers; eight great-grandsons, Cade Bishop, Logan, Treyton and Bryson Achor, Andrew, Brent, Davis and Tyler Harreld; one great-granddaughter, Lexi Bishop; two sisters, Helen Louks of Florida and Norma Young of Lebanon; and many nieces and nephews. She was preceded in death by her parents; husband; son-in-law, Don Bevington on November 2, 2020; sisters Esther J. Payne, Doris Irene Schafer and Mildred Armstrong; and two brothers James Leon Davis and William Harold Davis. Private family services will be held on Thursday, December 3, 2020 at Myers Mortuary, 1502 N Lebanon Street, Lebanon, IN. Burial will follow at Green Lawn Cemetery in Frankfort. The public is invited to join the live streamed memorial service at 1:30 p.m. on December 3, on the Myers Mortuary Facebook page. In lieu of flowers, donations can be made to Lighthouse Baptist Church, 858 W 250 N, Lebanon, IN 46052.

Madge Justine Lamberson, 95, Lebanon, Indiana, departed this life and went to be with the Lord on November 28, 2020. Born August 22, 1925, in Hamilton County, she was the fourth child born to the late Roy Basil and Cleo Velma (Shady) Davis.... View Obituary & Service Information

The family of Madge Justine Lamberson created this Life Tributes page to make it easy to share your memories.

Send flowers to the Lamberson family.