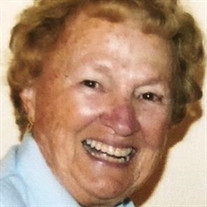 Margaret Elizabeth Wood Tribbett (Margy) passed away peacefully in her sleep on April 3, 2019, in Fort Lauderdale, Florida at the age of 97. Born in the country near Kirklin, Indiana, Margy enjoyed the life of children living on a farm. One of six siblings born to Zona Vern and Delbert Franklin Wood on October 16, 1921, Margy was the third child, and graciously accepted her position as a second mother to her younger siblings, Frank Jr., Mariam, and Mildred (Mid). Her older brother, Wendell Wood joined the Navy as a teen, fought in WWII, and made the Navy his career. Her older sister, Marjorie, moved to Indianapolis for beauty school, later settling in Hagerstown. A graduate of Kirklin High School in 1939, Margy was determined to attend college. Her mother, Vern, had attended Indiana State Teachers College, played beautiful piano, and encouraged all her children to play a musical instrument. Margy played the violin. But war was looming, and money scarce. Margy took a job at Winkler's, a large manufacturer of heating equipment, to help support the family. Later, she worked at Montgomery-Ward as an office assistant. It was there that she met her lifelong love- Jim Tribbett (DOD 3-14-01) of Lebanon. The Great Depression had made jobs scarce. But Jim was determined. He began working in the appliance department of Montgomery-Ward, assembing washers for free. He was such a skillful and dedicated worker, his manager put him on the payroll. Jim and Margy married on October 18, 1941, just three months before Jim went to War. He was sent to the University of Idaho for radio and transmission training before he headed for Europe aboard the LST 1. For four long war years, the couple saw each other only a handful of times. Jim served as Radioman First Class on the LST 1, a landing ship tank, serving in North Africa, Italy, and France. War was hard on Margy, but she, her sisters, and mother kept the home fires burning on North Lebanon Street, waiting for their loved ones to return. In 1945, Jim began an apprenticeship with his grandfather, Harry Saunders, who was a gold-leaf expert and sign painter at Saunders of Lebanon. Already skillful and artistic, Jim learned the dying art of gold-leaf lettering and art. One of his customers was Hicks Bus Body Company, maker of school buses in Lebanon. He lettered over a thousand school buses. The couple started a family in 1946 with the birth of their first daughter, Patricia Ann, followed just 21 months later by a second daughter born in 1947, Peggy Jean. Jim was asked to drive a school bus to Fort Lauderdale, Florida, the Winter home of Ruth and Earl Hicks, owners of Hicks Bus Body Company. Fort Lauderdale was a paradise to Jim. They packed up their little girls and drove to Fort Lauderdale to begin a new life full of promise and opportunities. Margy had never been away from her mother and family. Those first few years were tough on her and the rest of the Wood family. But, Fort Lauderdale was a wonderful change for the Tribbett family. Their daughters flourished in school. Both girls enjoyed successful careers in education and the law. Margy was a devoted member of the First Presbyterian Church in Fort Lauderdale, Florida. Margy was the first Clerk of the Small Claims Court in Fort Lauderdale. Her love for the law was realized during her years assisting and mentoring young lawyers. She spent fifteen years as Chief Clerk, receiving several awards of excellence. Jim and Margy dreamed of retirement in a golf community in North Carolina. They bought a small house in Linville, North Carolina, where they enjoyed golf four to five times a week. They became club champions at the Linville Land Harbor Golf Club for many years. Margy proudly held the record for eight holes-in-one. Jim had "only" seven! But, their world revolved around their family. Margy is survived by her daughter, Patty Purcell (Bill), granddaughter, Peggy Purcell, grandson, Chad Purcell, great-grandson, Masen Purcell, and great-granddaughter, Bella Alper. She is also survived by her daughter, Peggy Gehl, a retired Broward County Judge, and granddaughters, Megan Gehl and Lauren Gehl. Margy is also survived by one sister, the only surviving sibling, Mariam Lenox (Jack), whom she adored, and sixteen (16) nieces and nephews, all of whom she loved dearly, and they all loved her. The world is an emptier place without Margy. She filled the lives of so many with her good humor and kindness. She lit up a room. She was the soul of any group she joined or office where she worked. She will be buried, as she wished, with Jim, and next to her mother, Vern, brothers, Wendell and Frank, Jr., and his wife, Ann, at the Mounts Runn Cemetery in Whitestown on May 18, 2019. May God bless her send her on a safe journey. Donations may be sent to Peggy Gehl, 600 W. Las Olas Blvd. #2204, Fort Lauderdale, FL 33312, for the Margy and Jim Tribbett bench fund. Park benches honoring Jim and Margy will be placed on the 10th hole at the Linville Land Harbor Golf Club in Linville, NC, and on Ulen Country Club where Jim caddied and learned the game of golf.

Margaret Elizabeth Wood Tribbett (Margy) passed away peacefully in her sleep on April 3, 2019, in Fort Lauderdale, Florida at the age of 97. Born in the country near Kirklin, Indiana, Margy enjoyed the life of children living on a farm. One... View Obituary & Service Information

The family of Margaret Tribbett created this Life Tributes page to make it easy to share your memories.

Send flowers to the Tribbett family.