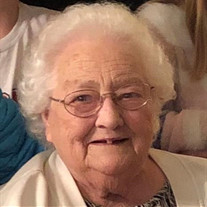 Marjorie Waneta Fall, 92, passed away Saturday, March 2, 2019, at Witham Memorial Hospital in Lebanon, Indiana. She was born November 19, 1926 in Boone County, Indiana, the daughter of the late Fred and Mary Etta (Ramsey) Bowen. She was first married to Roger Ray Anderson; he passed away in February 1959. She later was married to Richard L. Fall and he preceded her in death on August 13, 2003. Waneta was a graduate of Thorntown High School and attended business school in Lafayette. She worked as a legal secretary for over 20 years. She was a faithful member of Thorntown Christian Church and a former member of Thorntown United Methodist Church. She enjoyed her family, gardening, flowers, and golfing. Survivors include two daughters, Lynn (Jay) Morgan of Kettering, Ohio and Karla (Jim) Kouns of Lebanon; son, David (Janet) Fall of Thorntown; daughter-in-law, Sandy Anderson of Indianapolis; 13 grandchildren; and 20 great grandchildren. In addition to her parents and her husbands, Marjorie was preceded in death by a son, Charles Anderson. Funeral Services are planned for 12:00 noon on Wednesday, March 6, 2019, at Myers & Hunt Mortuary, 116 West Plum Street, in Thorntown, Indiana, with Rev. Glen Jewell, officiating. Visitation will be held from 10:00 a.m. until the time of service on Wednesday at the funeral home in Thorntown. Interment will follow services at Maple Lawn Cemetery in Thorntown. The family would like to thank the staff members of Witham Memorial Hospital CCU and Homewood Health Campus for the care and compassion. In lieu of flowers, memorials may be made in Marjorie’s memory to the Thorntown Christian Church or to the charity of the donor’s choice.

The family of Marjorie Waneta Fall created this Life Tributes page to make it easy to share your memories.

Send flowers to the Fall family.