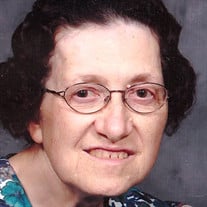 Marjorie Hine, 74, went to be with the Lord on November 16, 2016. She was born in Boone County, Indiana, on August 9, 1942, a daughter of the late Robert “Bob” Hine and Margaret Elizabeth (Frakes) Hine. Marjorie graduated from Frankfort Pilgrim High School in 1961. A longtime resident of Lebanon, Marjorie had worked at Oak Park Manor in Lebanon as a nurse’s aide. She then spent several years visiting and volunteering at Witham Memorial Hospital where she was named volunteer of the year in 1998. Marjorie was a member of the First Nazarene Church in Lebanon where she received the Distinguished Service Award. In her spare time, she enjoyed crafts, church activities and helping with the Sunday tea at Witham. Funeral Services will be held at Myers Mortuary, 1502 North Lebanon Street, Lebanon, Indiana, on Saturday, November 19, 2016, at 2:00 p.m., with Rev. J. Wesley Hertel and Rev. Billy Watts, officiating. Visitation is planned from 1:00 p.m. until time of the service on Saturday at the funeral home in Lebanon. Interment will follow at the Oak Hill Cemetery in Lebanon, Indiana. Survivors: Sisters: Barbara L. Koffel – Minneapolis, Minnesota Carol James – Indianapolis, Indiana Nieces and Nephews: Phil Koffel Elizabeth Koffel Matthew James and wife, Courtney Sarah James Zachary James Great Niece and Nephew: Dominic and Tegan James Deceased: In addition to her parents, Marjorie was preceded in death by a brother-in-law Jack Koffel. In Lieu of flowers, donations may be made in Marjorie’s honor to the charity of the donor’s choice.

The family of Marjorie Ann Hine created this Life Tributes page to make it easy to share your memories.

Send flowers to the Hine family.