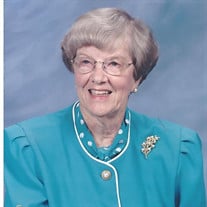 Martha (Bryant) Bymaster, 105, passed away on May 11, 2022. She was born October 18, 1916 to Porter and Flossie (Waskom) Bryant, deceased. She had one sister, Kay Ramp, deceased. She graduated from Lizton High School in 1934 and married Clyde Bymaster on September 1, 1938. They were married 58 years until his death in 1996. She and her husband lived near Fayette for 56 years and upon his death, she moved to Zionsville Meadows. She was active in 4-H in her youth and continued her involvement with her four children, grandchildren and great grandchildren. She and her children were active in starting the New Hope Christian Church in Whitestown. She taught Sunday school for many years as well as played the piano for church services. One of Martha’s favorite memories was playing for the High Hopes Trio. Later in life, she volunteered at Zionsville Meadows playing the good ole songs with her soft touch. She also enjoyed her friends on Hickory Lane cottages. Martha grew up in the depression, World War II era, where she learned to manage their ration book and pennies. Much of her life was spent on the basics of life-gardening, canning, laundry with an old wringer washer, while raising her kids with Christian values and love of country. Clyde and Martha took their children on wonderful vacations financed by the kids picking strawberries on their acre of land. She leaves four children, Diana (Robert) Lamb, Patsy (Jerry) Shultz, Frank (Rita) Bymaster and Peggy Eaton. She sacrificed at menial jobs to aid all four of their children through college, which was greatly appreciated. Martha was always proud of her 12 grandchildren: Dean (Debbie) Lamb, Don (Jodie) Lamb, Gordon (Diane) Lamb, Mary Lamb, Amanda (Tad) Thompson, Jeff (Michelle) Shultz, Jay (Amy) Shultz, Jim (Cassie) Shultz, Brett (Angie) Bymaster, Leah (Andy) Ehle, Melissa (Nick) Fishel, and Carrie Williamson. Her 27 great grandchildren affectionately called her “Nanna.” Even though her vision was going, she was hard at work to leave them one of her prized crochet Afghans. Alex, Ashley, Adam Lamb; Shelby, Emma, Riley, Faith Lamb; Jon, Jennifer Shultz; Anna, Jeremiah, Jacob, Fedlaine Shultz; Isiah, Eliana, Madyx, Jet Shultz; Isaac, Thomas, Jacob, Isabella, Caroline Thompson; Lanie, Micah, Fishel; Savanna, Andrew, Garrett, Courtney Williamson; Nehemiah Bymaster with Martha, Matthew, Paul Gatkuoch. She had a great-great granddaughter, Chelsea. She treasured her grandchildren leaving memories of sitting on the floor and playing games. Martha was a strong hard-working woman always supporting her children in their activities and dreams. She even hosted a Labor Day party for her extended family for over 40 years with help later in life at Lamb Farms. Funeral Services are to be held at 11:30 a.m. on Monday, May 16, 2022 at New Hope Christian Church, 5780 South Main Street, Whitestown, Indiana with Pastor David Bourne officiating. Visitation will take place on Monday from 10:00 a.m. until the time of service at the church. Interment will follow services at Oak Hill Cemetery in Lebanon. Memorials may be given in her memory to New Hope Christian Church-Mission Fund; 5780 S Main Street, Whitestown 46075.

Martha (Bryant) Bymaster, 105, passed away on May 11, 2022. She was born October 18, 1916 to Porter and Flossie (Waskom) Bryant, deceased. She had one sister, Kay Ramp, deceased. She graduated from Lizton High School in 1934 and married Clyde... View Obituary & Service Information

The family of Martha O. Bymaster created this Life Tributes page to make it easy to share your memories.

Send flowers to the Bymaster family.