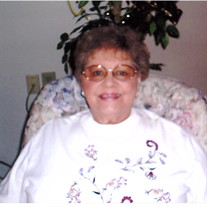 Martha Louise McKenzie, 95, passed away on Wednesday, January 15, 2020, at Homewood Health Campus in Lebanon, with family by her side. She was born on August 8, 1924 in Boone County; a daughter of the late John and Susie Louisa (Miller) Dickerson. She attended Lebanon Schools and during WWII she was employed by Indiana Bell Telephone in Lebanon, Indiana. On January 25, 1946, Martha married John Calvin McKenzie in Lebanon, Indiana at the United Brethren Church parsonage. They shared 62 years together when he had passed away on August 28, 2008. The family moved to Colfax in 1957 where she was employed as a telephone operator, also at the furniture factory and was a cook at Miller’s restaurant in Colfax. She also worked as an extended care nurse aide in nursing homes and as a private caretaker. Martha was baptized at Centenary United Methodist Church and was an auxiliary member of the VFW, Moose Lodge, American Legion, and the Eagles, all of Lebanon. Martha enjoyed reading, dancing and listening to music. She was a devoted wife, mother, grandmother, and a compassionate and understanding friend. Survivors include: Grandson: Robert “Bobbie” Lane, Jr. and girlfriend, Carla Gant of Frankfort Several Nieces and Nephews In addition to her parents and husband, Martha was preceded in death by a daughter, Vicki Lane; brothers, Bennie Dickerson, Virgil Dickerson, Delmer Dickerson and John Dickerson; sisters, Juanita Smith, Mary Miller and Ethel Shelly. Funeral Services will be held at 2:00 p.m. on Monday, January 20, 2020, at Myers Mortuary, 1502 North Lebanon Street, in Lebanon, Indiana. Visitation is planned for Monday, January 20th from noon to 2:00 p.m. at the funeral home in Lebanon. Entombment will follow services at Oak Hill Mausoleum in Lebanon, Indiana. Memorials may be made to the VFW Post 910, 318 West Main Street, Lebanon, Indiana 46052.

Martha Louise McKenzie, 95, passed away on Wednesday, January 15, 2020, at Homewood Health Campus in Lebanon, with family by her side. She was born on August 8, 1924 in Boone County; a daughter of the late John and Susie Louisa (Miller) Dickerson.... View Obituary & Service Information

The family of Martha L. McKenzie created this Life Tributes page to make it easy to share your memories.

Send flowers to the McKenzie family.