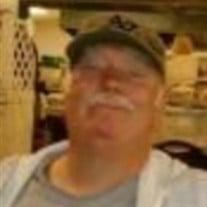 Marvin C. Simmons, 73, of Darlington, Indiana passed away on Saturday, May 30, 2020 at Witham Memorial Hospital in Lebanon, Indiana. He was born July 16, 1946 in Indianapolis, Indiana; a son of the late Creed and Virginia (Ellyson) Simmons. Marvin was a 1965 graduate of Arsenal Tech High School. He was an automobile mechanic and also employed for Heritage Asphalt Materials in Indianapolis, retiring in 2009. On August 23, 1984 he was married to Cathy Sue (McKinney) Simmons in Ft. Worth, Texas; she survives. He loved deer hunting with his dad, uncles, and cousins in West Virginia. He also enjoyed fishing, going junkin' and gardening, but taking his children and grandchildren hunting, or watching nature grow was his true joy and he adored his family. Those who knew Marvin, knew he was not always the easiest to get along with, but had a huge heart and would always be there to lend a helping hand. Marvin fought and battled health issues for the last 25 years, but it never slowed him down until last May after the loss of his youngest son. He had met and fought many battles, but he couldn't beat this one, even though he put up a tough fight. His family has been by his side and in spirit this last year, which meant so much to him. Survivors: Wife: Cathy Simmons of Darlington, Indiana Children: Kim Simmons (Tom Speer) of Lebanon, Indiana Amy (Ben) Smith of Thorntown, Indiana Creed (Kristy) Simmons of Fountain, Colorado Heather Tyner of Lebanon, Indiana Grandchildren: Vincent (Haleigh) Smith Avery Smith Cole Smith Zaria Smith Eli Simmons Samantha Tyner Allie Tyner Mickey Tyner Great Grandchildren: Benson Miller Maxwell and Mia Smith Mother-in-law: Polly McKinney of Lebanon In addition to his parents, Marvin was preceded in death by a son, Clinton E. Simmons. Memorial Services are to be held at 7:00 p.m. on Friday, June 5, 2020, at the funeral home in Lebanon with Rick Neal officiating. Visitation is planned from 3:00 to 7:00 p.m. on Friday, June 5, 2020 at Myers Mortuary, 1502 North Lebanon Street, Lebanon, Indiana. Boone County Crematory has been entrusted with his cremation arrangements following services. Memorials may be made in his memory to the American Heart Association

Marvin C. Simmons, 73, of Darlington, Indiana passed away on Saturday, May 30, 2020 at Witham Memorial Hospital in Lebanon, Indiana. He was born July 16, 1946 in Indianapolis, Indiana; a son of the late Creed and Virginia (Ellyson) Simmons. Marvin... View Obituary & Service Information

The family of Marvin C. Simmons created this Life Tributes page to make it easy to share your memories.

Marvin C. Simmons, 73, of Darlington, Indiana passed away on...

Send flowers to the Simmons family.