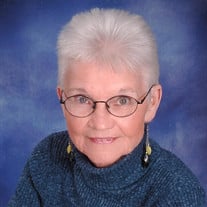 Mary Frances Brown, 89, passed away on Monday, May 20, 2019, at Homewood Health Campus in Lebanon, Indiana. She was born in Alaska, Indiana, on March 7, 1930, a daughter of the late Ernest and Goldie Joy (White) Frye. She was married to Charles J. Brown and later divorced. Mary was a member of Grace Baptist Church in Lebanon and held auxiliary memberships with the Lebanon Eagles Club, American Legion in Lebanon, and VFW in Greenfield. In addition, she was a member of the Eastern Star. She retired from Witham Memorial Hospital as an LPN in the early 1990s. Mary was a devoted mother, grandmother and great grandmother. She loved her family and enjoyed golfing, bowling, and fishing in her free time. Survivors include: One Son: Lee Brown of Carmel, Indiana Three Daughters: Pat Wethington of Greenfield, Indiana Lisa Brown of Brownsburg, Indiana Pamela Waggoner Cook of Indianapolis Four Grandchildren: Brad and Brian Cook Bill and Sean Farrell Six Great Grandchildren In addition to her parents, Mary was preceded in death by a daughter, Judy Wethington Farrell; granddaughter, Misty Moody; and seven brothers, Ray Allen Frye, Robert Eugene Frye, Forrest Frye, Ernest Frye, Jr., Glen Franklin Frye, George William Frye, and Harry Edward Frye. Visitation is planned from 4:00 to 8:00 p.m. on Thursday, May 23, 2019, at Myers Mortuary, 1502 North Lebanon Street, in Lebanon, Indiana. Funeral Services will be held at 10:30 a.m. on Friday, May 24, 2019 at the funeral home in Lebanon. Interment will follow services at Oak Hill Cemetery in Lebanon. Memorials may be made in her memory to the charity of the donor’s choice.

Mary Frances Brown, 89, passed away on Monday, May 20, 2019, at Homewood Health Campus in Lebanon, Indiana. She was born in Alaska, Indiana, on March 7, 1930, a daughter of the late Ernest and Goldie Joy (White) Frye. She was married... View Obituary & Service Information

The family of Mary F. Brown created this Life Tributes page to make it easy to share your memories.

Send flowers to the Brown family.