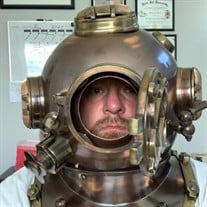 Matthew Patrick Beeson, 43, passed away unexpectedly July 31, 2021, at his home in Pittsboro, Indiana. He was born March 17, 1978, in Lebanon, Indiana; a son of Marilyn J. (Smith) Ritchardson and the late John B. “Johnny B” Beeson. On July 10, 1999, he was married to Melissa (Thompson) Beeson in Advance, Indiana. Together, they had two sons, later divorced and she survives. He was engaged to Lindsey (Figg) Rhorer; and have been together since 2014. They shared seven loving years together and he was like a father to her children, Emryk and Maci Rhorer. Matt was a 1996 graduate of Western Boone Jr. Sr. High School and had attended the College of Oceaneering in Wilmington, California. Following school, he served his country honorably in the U.S. Army. Matt worked as a commercial diver for several years. He was a member of the Boone Masonic Lodge # 9 F & AM in Lebanon. Matt loved shooting sports, scuba diving, woodworking, and working on cars. He loved life and enjoyed spending time with his boys. He never met a stranger and could carry on a conversation with anyone. Matt was a great friend to all who knew him and will be deeply missed. Survivors include his sons, Alec Beeson of Advance and Aiden Beeson of Crawfordsville; fiancée, Lindsey Rhorer of Pittsboro; mother, Marilyn Ritchardson of Advance; sisters, Mandy Abney (Brad Rogers) of Brazil, Misty and Dave Herrington of Crawfordsville, Kristy and Matt Busenbarrick of Lebanon along with many nieces, nephews, aunts, uncles and cousins. In addition to his father, Matt was preceded in death by his paternal grandparents, John & Frances Beeson; and his maternal grandparents, Frances & Ermine, Jr. Smith. Visitation is planned from 4:00 to 8:00 p.m. on Friday, August 6, 2021, at the North Salem Christian Church, 6 North California Street, in North Salem, Indiana, with masonic services beginning at 7:30 p.m. Funeral services will be held at 2:00 p.m. on Saturday, August 7, 2021, at the church in North Salem, with Pastor Rob Baire, officiating. Interment with military rites will follow services at Fairview Cemetery in North Salem. Porter and Hunt Funeral Home & Crematory has been entrusted with his arrangements. Online condolences may also be left on the Porter Funeral Home website.

The family of Matt Beeson created this Life Tributes page to make it easy to share your memories.

Send flowers to the Beeson family.