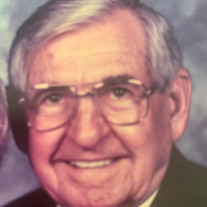 Max Kilgore, 97, passed away on Friday night, June 5, 2020 at St. Vincent Hospice in Indianapolis. He was born October 13, 1922 in Swayzee, Indiana, a son of the late Waldo and Ethel (Figgins) Kilgore. On August 10, 1946, he was married to Phyllis (Malott) Kilgore in Marion, Indiana; she survives. Max graduated from Swayzee High School at the age of 17 top of his class. He was hired in at Delco Remy – a Division of General Motors and worked there until 1942. WWII had already begun and before being drafted, he enlisted in the Air Force Cadet Program. His papers did not come in soon enough, so he was drafted into the Army. While there, he made the rank of corporal. At one point he was issued a gun and was sent by train to bring an AWOL soldier back from California. Ten months into the Army, his Air Force Cadet Program came through. He finished the cadet program in 18 months, ranked 11th out of 500 and came out a Bombardier. His crew was scheduled to go overseas, but he was pulled out to do a teaching job. Upon leaving the Air Force in 1945, he remained on-call for 11 years. Max went to work for his father in the Plumbing and Heating business. While there he was recognized by a salesperson from Stewart Warner, an Air Conditioning Company. He was hired and began working at Stewart Warner as a DSM and moved to Maryland. He was there for four years, awarded the DSM of the year during his first year. Stewart Warner moved him back to the company as an assistant sales manager to which later, he made Sales Manager, and ultimately making General Manager of that division. He helped close the plant in 1977. He then moved to Jacksonville, FL in 1978 and was there for three years. He was assigned General Manager to a Hardware (Furniture) plant in Winston Salem, NC. In 1981, he was hired to manage WeatherKing in Orlando, FL, retiring in 1985. Survivors include his wife of 73 years, Phyllis Kilgore; sister, Joan Fox; three grandchildren, DeeAnn (Wood) Culley, Ryan Wood, and Matthew Kilgore; nine great grandchildren and one great great grandchild. In addition to his parents, Max was preceded in death by two children, Linda A. (Kilgore) Wood and Mark K. Kilgore; and a brother, Gene Kilgore. Graveside Funeral Services with military rites are to be held at 2:00 p.m. on Wednesday, June 10, 2020, at Browns Wonder Cemetery in Lebanon, Indiana. Myers Mortuary has been entrusted with his burial arrangements. Memorials may be directed in his memory to the charity of the donor’s choice.

The family of Max Kilgore created this Life Tributes page to make it easy to share your memories.

Send flowers to the Kilgore family.