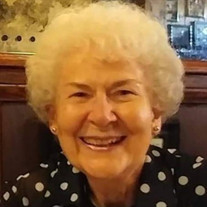 Mrs. Melva Dean Byrd, 84, passed away peacefully on Friday evening, January 14, 2022, at Homewood Health Campus in Lebanon, Indiana. She was born on July 26, 1937, in Jasper, Indiana, a daughter of the late Linus and Aurelia (Seng) Klee. On July 26, 1958, she was united in marriage to Harold Robert “Bob” Byrd in Jasper, Indiana; he survives. Melva was a 1955 graduate of Jasper High School. After she and Bob moved to Lebanon, Melva worked in the bookkeeping department for the Boone County State Bank until their son, Greg, was born. She held memberships with St. Joseph Catholic Church and Ulen Country Club of Lebanon. She enjoyed tending to her flowers while working in the yard and playing cards with her friends. Melva had a passion for reading and genealogy. She liked recording the history of her and her husband’s ancestry. She loved listening to music and dancing. Over the years, she and Bob enjoyed traveling to all but three states, visiting historical sites. Above all, Melva loved her family, visiting her children in Fort Wayne often. Survivors include her daughter, Michelle Lynn Byrd Wood and husband, Chris of Fort Wayne; daughter-in-law, Sara Steinbacher; brother-in-law and sister-in-law, Paul and Jean Byrd; sisters-in-law, Sally Byrd and Mary Klee; and many nieces and nephews. In addition to her parents, Melva was preceded in death by her beloved son, Gregory Alan Byrd; a brother, Roger Klee; and a sister, Iris Gutgsell. A Funeral Mass will be held at St. Joseph Catholic Church in Lebanon at 11:00 a.m. on Saturday, January 22, 2022, with the Rosary at 9:00 a.m. Family will greet friends following the Rosary until the time of the Mass. Interment will be held at St. Joseph Cemetery in Lebanon. Memorials may be directed in Melva’s memory to the ALS Association Indiana Chapter, P.O. Box 56023, Indianapolis, IN 46256. Online Condolences: www.myersmortuary.com

Mrs. Melva Dean Byrd, 84, passed away peacefully on Friday evening, January 14, 2022, at Homewood Health Campus in Lebanon, Indiana. She was born on July 26, 1937, in Jasper, Indiana, a daughter of the late Linus and Aurelia (Seng) Klee. On... View Obituary & Service Information

The family of Melva D. Byrd created this Life Tributes page to make it easy to share your memories.

Send flowers to the Byrd family.