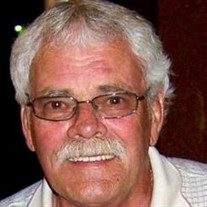 Michael Gene “Mike” Moss, 75, passed away Wednesday, July 3, 2019, at his home in Lebanon with his family by his side. He was born in Indianapolis on September 24, 1943, the son of the late Clyde Gene and Frances Eleanor (Powell) Moss. Mike was a 1961 graduate of Lebanon High School. Following school, he joined the United States Navy and was honorably discharged. On October 10, 1969, Mike was married to Dana Ann (Walker) Moss–Brown in Lebanon. They later divorced and she survives. He worked for Indiana Bell, also known as Ameritech, for 34 years. Following retirement, Mike could be found in his backyard shop stripping antique furniture, making it look new again. He was talented with his hands and took great pride in repairing old furniture to give it a new shine. He was skilled at creating beautiful stained glass artwork in which he shared with his family and friends. Mike loved the outdoors; mushroom hunting on his family farm, searching for arrowheads, shooting muzzleloaders, and admiring his many beautiful flowers growing in his yard. During the winter months, he kept busy pushing snow while keeping his neighbors’ driveways plowed. Mike was a loving father and grandfather. He was a loyal and generous neighbor and friend to many. His memberships included the First Presbyterian Church, Elks Lodge #635, VFW Post 910, the Boone County Historical Society where he was a life member and served as President; and the Indiana Archeological Society. Survivors include: Daughter: Alana (Adam) Hart of Lebanon Two Grandsons: Nathan Michael Allen and Brandon Scott Allen of Lebanon Sister: Judy (Nick) Walburn of Lebanon Nephew: Brian (Pamela) Acton of Carmel Niece: Barbara Harnish of Lexington, Kentucky One Great Nephew and Four Great Nieces Visitation is planned from 4:00 to 8:00 p.m. on Monday, July 8, 2019 at Myers Mortuary, 1502 North Lebanon Street, Lebanon, Indiana, with Elks Rites beginning at 8:00 p.m. Funeral Services will be held at 10:30 a.m. on Tuesday, July 9, 2019 at the funeral home in Lebanon. Interment with Military Rites will following services at Oak Hill Cemetery in Lebanon. Memorials may be made in his memory to the First Presbyterian Church, 128 East Main Street, Lebanon, IN 46052; St. Labre Indian School, www.stlabre.org; or the Lebanon Public Library, 104 East Washington Street, Lebanon, Indiana 46052.

The family of Mike Moss created this Life Tributes page to make it easy to share your memories.

Send flowers to the Moss family.