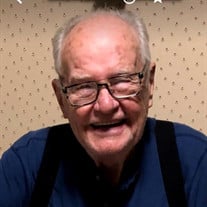 Milburn Eugene “Gene” Watts, 94, of Lebanon, Indiana, passed away on Sunday, December 13, 2020 at The Waters of Lebanon. He was born in Lebanon on November 14, 1926; a son of the late James Leslie “Les” Watts and Mable Alice (Dillion) Watts Strauss. Gene attended Lebanon High School and he served his country honorably in the United States Navy from 1944 to 1947. He was a Seaman 3rd class petty officer stationed on USS Laysan Island. On September 3, 1950 in Greenwood, Mississippi, he was married to Norma B. (Lister) Watts. She survives and they shared 70 loving years together. Gene worked in the oil and petroleum industry for over thirty years. He was employed for various companies beginning with Gary Steel Mills. He later worked for Lafayette Alcoa Aluminum, Commercial Filters, Stewart Warner, Larr Farm Equipment and H & H Auto. He also owned and operated Sunoco Station 39 & 32 and Watts Sinclair Oil. Gene retired in 1992 from Boone County Co-Op. He enjoyed woodworking, gardening, fishing, bowling and riding his motorcycle. He was a longtime member of the Eagles Club in Lebanon and a member of Advance Community Christian Church. He was immensely proud and treasured his large and loving family. Survivors include his wife, Norma Watts of Lebanon; six children, Linda (Terry) Smith of Advance, Wendy (David) Mitchell of Jamestown, William Watts of Hockley, Texas, Ray (Kathy) Watts of Coatesville, Joe (Penny) Watts of Advance, and Becky Lane of Advance; eighteen grandchildren; thirty-five great grandchildren; and two great-great grandchildren plus one on the way. In addition to his parents, Gene was preceded in death by a brother, James Keith Watts; one grandchild; and one great-grandchild. Visitation is planned from 4:00 p.m. to 8:00 p.m. on Tuesday, December 15, 2020 at Advance Community Christian Church, 305 North Main Street, in Advance, Indiana. Funeral Services with military rites will be held on Wednesday, December 16, 2020 at 11:00 a.m. with visitation again from 10:00 to 11:00 a.m. at the church in Advance. Boone County Crematory has been entrusted with his cremation following services. Burial of ashes will take place at Oak Hill Cemetery in Lebanon at a later date. Memorials may be made in his memory to the Advance Community Church, 305 North Main Street, Advance, Indiana 46102.

The family of Milburn "Gene" E. Watts created this Life Tributes page to make it easy to share your memories.

Send flowers to the Watts family.