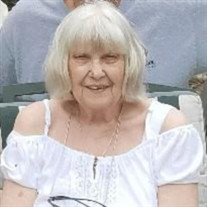 Mrs. Mina Louise Colgrove, 84, passed away Sunday, October 10, 2021, at her home in Lebanon, Indiana. She was born January 15, 1937, in Elwood, Indiana, a daughter of the late Walter Jacob Edmonds and Geneva Isabell (Johnson) Edmonds Waterman. At an early age, Mina and her family moved to Tipton, Indiana, later to Frankfort, and then to Mechanicsburg. She was a 1954 graduate of Lebanon High School. She attended Ball State University for two years. On April 6, 1956, she was united in marriage to Leon Mort Colgrove at the Central Christian Church in Lebanon. He preceded her in death on July 25, 2007. Mina was devoted wife, mother, grandmother, and homemaker. She was a member of the VFW Auxiliary in Lebanon. She loved her family and enjoyed caring for them. She was also an avid reader of the classics and enjoyed tending to her flowers. Survivors include three sons, Derek Colgrove of Lebanon, Eric Colgrove of Lebanon, Kerry (Kim) Colgrove of Lebanon; six grandchildren, Cara, Erica, Aleigh, Lindsay, Bobby, Sarah and Cierra; several great grandchildren; three brothers, Daniel M. (Cheryl) Edmonds of DeLand, Florida, Jeff (Cheryl) Edmonds of Lebanon, Jerry (Becky) Edmonds of Peru, Indiana Several Nieces and Nephews Deceased: In addition to her parents and her husband, Mina was preceded in death by two brothers, Robert Edmonds and James W. Eckels. Private Graveside Memorial Services will be held at Oak Hill Cemetery in Lebanon, Indiana. Myers Mortuary and Boone County Crematory have been entrusted with her arrangements. In lieu of flowers, contributions may be made to the Boone County Cancer Society.

Mrs. Mina Louise Colgrove, 84, passed away Sunday, October 10, 2021, at her home in Lebanon, Indiana. She was born January 15, 1937, in Elwood, Indiana, a daughter of the late Walter Jacob Edmonds and Geneva Isabell (Johnson) Edmonds Waterman. At... View Obituary & Service Information

The family of Mina L. Colgrove created this Life Tributes page to make it easy to share your memories.

Send flowers to the Colgrove family.