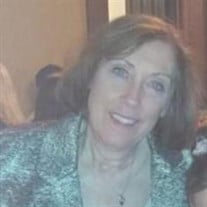 Mrs. Monta Faye Taylor, 66, of Thorntown, Indiana passed away of natural causes at home on Wednesday, August 5, 2020. She was born in Lebanon, Indiana on June 17, 1954, a daughter of the late Roy W. “Jack” and Veatrice Lewis. She was a 1972 graduate of Thorntown High School. Following high school, she attended Purdue University and received her bachelor’s degree in psychology from Texas Woman’s University. She was married to Michael Fecher in 1974 and he preceded her in death. On December 20, 1986, she married to Robert G. Taylor at the Dover Christian Church; he survives. A devoted homemaker, wife, mother, and grandmother, she loved taking care of her family. Monta was a Girl Scout leader when her children where younger and while living in Colorado, she attended South Park Community Church. Monta volunteered in many community endeavors. She was very involved with the Thorntown Heritage Museum, where she was secretary. She also was a substitute teacher for both Western Boone and Lebanon school districts and would often volunteer her talents with after school activities. She enjoyed camping and snow skiing, but nothing was more important to her than family. Survivors: Husband: Robert Taylor - Thorntown Children: Matthew Fecher – Atlanta, Georgia Melissa “Missy” (Andy) Turner– Greenfield, Indiana Rachel (Patrick) Smith– Thorntown Two Stepchildren Dr. Carrie Ann (Andy) Bean– Washington, Indiana Adam (Christina) Taylor– Franklin, Indiana Six Granddaughters and Three Grandsons Visitation will be held from 4:00 to 8:00 p.m. on Monday, August 10, 2020 at Myers Mortuary, 1502 North Lebanon Street, in Lebanon, Indiana. Funeral Services will be held at 11:00 a.m., on Tuesday, August 11, 2020 at the funeral home in Lebanon. Interment will follow services at Maple Lawn Cemetery in Thorntown, Indiana. Memorials may be made in her memory to the Thorntown Heritage Museum, 124 West Main Street, Thorntown, IN 46071 or Boone County 4-H Clubs, 1300 East 100 South, Lebanon, IN 46052

The family of Monta F. Taylor created this Life Tributes page to make it easy to share your memories.

Send flowers to the Taylor family.