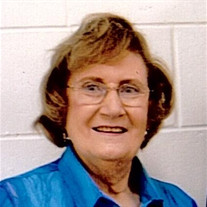 Murrell Marie Pigg, 92, of Lebanon, Indiana, passed away Thursday, April 25, 2019 at Bridgewater Healthcare in Carmel. She was born on March 3, 1927 in Louisville, Kentucky, a daughter of the late Julius Carl Obermiller and Estelle Elizabeth (Williams) Scholl. Murrell was a graduate from Jeffersonville High School and a 1949 graduate of Purdue University in the School of Pharmacy. While attending Purdue she was a member of Kappa Epsilon and in the PMO University Choir. On January 31, 1948, she was married to Frank Cornielson Pigg; they later divorced but remained close friends. He preceded her in death in 1988. In 1951, she and her husband moved to Lebanon. Murrell loved being home with her children while they were young; as her children grew she went back to work full-time as a pharmacist. With a servant’s heart she was active in all aspects of the Central Christian Church in Lebanon where she was in the choir, a Sunday school teacher, Deacon and the first female Elder. She also was a State and National Delegate and later was honored Elder Emeritus. Murrell also was a member of Indiana Landmarks and Boone County Historical Society. She also volunteered many hours at the Lebanon Caring Center. In her spare time she enjoyed needlework, collecting pigs and pharmacy memorabilia. She was a caring, dedicated lady who touched many lives. Survivors include: One Son: Richard “Dick” Carl Pigg-Westfield, Indiana One Granddaughter: Carly Arnold- Lebanon, Indiana One Brother: Robert Obermiller-Charlestown, Indiana Numerous Nieces and Nephews In addition to her parents and her husband, Murrell was preceded in death by a daughter, Deanna Kay Frail; son-in-law, Terry Frail and sister-in-law, Carol Obermiller. Visitation is planned for Wednesday, May 1, 2019 from 4:00 p.m. -7:00 p.m. at Myers Mortuary, 1502 North Lebanon Street, Lebanon, Indiana 46052. Funeral Services will be held on Thursday, May 2 at 2:00 p.m. at Central Christian Church, 311 East Main Street, Lebanon, Indiana 46052. Interment of Ashes will follow at a later date. In lieu of flowers, memorials may be directed to the Charity of the Donor’s Choice. Myers Mortuary and Boone County Crematory have been entrusted with her care. Online Condolences: MyersMortuary.com

Murrell Marie Pigg, 92, of Lebanon, Indiana, passed away Thursday, April 25, 2019 at Bridgewater Healthcare in Carmel. She was born on March 3, 1927 in Louisville, Kentucky, a daughter of the late Julius Carl Obermiller and Estelle Elizabeth... View Obituary & Service Information

The family of Murrell Marie Pigg created this Life Tributes page to make it easy to share your memories.

Send flowers to the Pigg family.