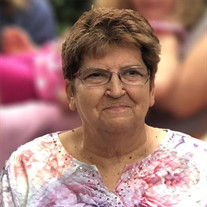 Mrs. Patricia E. Carnahan, 72, passed away on Sunday, November 15, 2020 at Methodist Hospital in Indianapolis, Indiana. She was born in Boone County on May 1, 1948; a daughter of the late Otis John and Mary Alice (French) Philbeck. She attended Lebanon Schools and on March 7, 1965 she was married to Robert H. “Bob” Carnahan, Sr., he preceded her in death on May 17, 2004. Following their marriage, the couple resided in Lebanon and Indianapolis prior to moving to Jefferson for two years prior to the present Frankfort address where she had resided since 1981. She was a member of Community Christian Church in Frankfort. In Frankfort, she was employed at Wesley Manor Retirement Center for thirty years. Patricia cherished the friendships she made over the years while working at Wesley Manor. Patricia enjoyed attending festivals and flea markets. She adored her family and enjoyed spending time with them. Survivors include: One Son: Robert H. “Rob” (Nikki) Carnahan of Nashville, Tennessee One Daughter: Stacy Jo (Edward) Keiser of Lafayette, Indiana One Sister: Marty Downs of Lebanon, Indiana Grandchildren: Kaylee Jo Keiser of Lafayette, Indiana Zebediah Carnahan of Tennessee Dovey Carnahan of Tennessee Special Niece: Ashley (Eric) Boyer of Lebanon, who grew up with the Carnahan family. Several other nieces and nephews Deceased: In addition to her parents and husband, Patricia was preceded in death by a daughter, Teresa Kay Carnahan; sisters, Charlotte Philbeck, Leona Britton, Pamela Wagner; and one brother, Johnny Philbeck. Memorials may be made in her honor to the St. Jude’s Children’s Research. 262 Danny Thomas Place, Memphis, TN 38105. Graveside Services will be held at 1:00 p.m. on Friday, November 20, 2020, Lincoln Memory Gardens in Whitestown, Indiana.

Mrs. Patricia E. Carnahan, 72, passed away on Sunday, November 15, 2020 at Methodist Hospital in Indianapolis, Indiana. She was born in Boone County on May 1, 1948; a daughter of the late Otis John and Mary Alice (French) Philbeck. She attended... View Obituary & Service Information

The family of Patricia E. Carnahan created this Life Tributes page to make it easy to share your memories.

Send flowers to the Carnahan family.