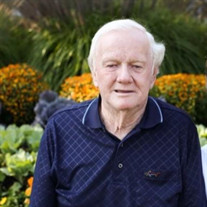 Mr. Paul Webster Esch, 86, of Lebanon, passed away on Friday, January 22, 2021 at Copper Trace Senior Living in Westfield, Indiana. He was born on November 1, 1934 in Swedesborough, New Jersey, one of four sons to the late Royal L. and Ethel W. (Wilkinson) Esch. In 1950 Paul’s father retired from the military and the family lived in Indiana, Pennsylvania. Paul was a 1952 graduate of Indiana Joint High School in Pennsylvania and served his country for six years in the United States Army Reserves. On August 1, 1956, he was married to Geri (Stewart) Esch in Winchester, Virginia; she survives. Paul moved his family to Anderson, Indiana in 1962 and then to Lebanon, Indiana in 1964 where they still reside. From 1968–1978, Paul and Geri co-owned and operated Fairway Golf Course with Henry and Minniabelle Corbly. Paul retired from the United States Postal Service after 29 years as a dedicated rural mail carrier. He was raised in the Methodist faith and held memberships with the Elks Club and American Legion, both in Lebanon. Paul was an excellent golfer having had two holes-in-one during his career. He enjoyed many other activities as well including, tennis, swimming, bowling, and playing cards. Paul loved riding his motorcycle and was a member of the Gold Wing Road Riders Association. He was a devoted husband, father, and grandfather who loved his family dearly. Survivors include his wife: Geri Esch of Lebanon; three daughters: Barbara Ann (Martin) Phillips of Chesapeake, Virginia, Sharon Kaye (Stephen) Smith of Plainfield, Indiana, Sandra Michelle (Robert) Smith of Westfield, Indiana; six grandchildren: Andria (Jamaal) Edwards; Emily (Nicholas) Williams; Kayela (Luke) Ziarek; Laci (Darren) Watkins; Dustin (Emily) Dodson; Sarah (Jeremy) Moore; twelve great grandchildren; brother: David (Phyllis) Esch of Export, Pennsylvania, many nieces and nephews. In addition to his parents, Paul was preceded in death by two brothers, R. Leslie Esch, Jr. and George E. Esch. Paul’s wishes will be honored with Private Family Memorial Services on Friday, January 29, 2021, at Myers Mortuary in Lebanon, Indiana. Burial of Ashes will take place at a later date at Oak Hill Cemetery in Lebanon. Boone County Crematory has been entrusted with his cremation arrangements. Paul was a victim of the Corona virus. He fought a hard battle, may he now rest in peace. Memorials may be made to the charity of the donor’s choice.

Mr. Paul Webster Esch, 86, of Lebanon, passed away on Friday, January 22, 2021 at Copper Trace Senior Living in Westfield, Indiana. He was born on November 1, 1934 in Swedesborough, New Jersey, one of four sons to the late Royal L. and Ethel... View Obituary & Service Information

The family of Paul W. Esch created this Life Tributes page to make it easy to share your memories.

Send flowers to the Esch family.