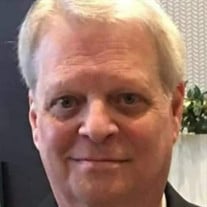 Randall Wayne “Randy” Moffitt, 67, of Lebanon, passed away Monday night, June 1, 2020, after a four-month long illness. He was born December 20, 1952 in Lafayette, Indiana, to the late Arthur “Art” and Dorothy (Williams) Moffitt. Randy graduated from Lafayette Jefferson High School in 1971. In 1975, he graduated from Indiana State University in Terre Haute with a Bachelor of Science degree in Theater and a double minor in Business and Radio & TV. Before moving to Lebanon, he was involved in acting in local Lafayette TV commercials and in the local theater. In August 2007 he met Sylvia (Ashley) Davis of Lebanon. He and Sylvia were married on March 4, 2014. They were a devoted couple from the moment they met until his passing. In healthier times, Randy liked to visit local festivals, farmers markets, garage sales, play video games and frequent Brown County, Indiana. He also enjoyed working in his flower garden. Randy is survived by his wife, Sylvia Moffitt of Lebanon; two sons from a previous marriage, Ryan A. (Maribeth) Moffitt and Kyle D. Moffitt, both of Lafayette; stepdaughter, Allison M. Sylviadotter, stepson in law, Johan Wedén and stepgranddaughter, Linnéa Olausson, all of Orebro, Sweden; sister, Pam (Donald “Duke”) Hartman of Oviedo, FL; two nieces, Jennifer Mason of Oviedo, FL and Kelly (Chris) Cerasoli of San Diego, CA; two great nephews and a great niece; his dog, Kelsey, and two cats, Petina and Cookie. Private services will be held at a later date. Myers Mortuary and Boone County Crematory have been entrusted with his cremation arrangements. In lieu of flowers, memorials may be directed in Randy’s memory to the Humane Society for Boone County, P.O. Box 708, Lebanon, IN 46052 or to the charity of the donor’s choice. Sylvia would like to give special thanks to the staff of Witham Memorial Hospital, Witham Extended Care Unit, Suburban Home Health Care, and Suburban Hospice. Their care and concern for Randy were invaluable through this difficult time.

The family of Randall W. Moffitt created this Life Tributes page to make it easy to share your memories.

Send flowers to the Moffitt family.