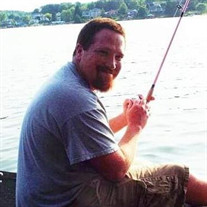 Mr. Raymond Anthony Thoma, 35, passed away Saturday morning, March 9, 2019 in his home in Greenwood, Indiana. Ray fought a long and fierce battle with leukemia and after 2 years he has gone home to our Father in Heaven. Ray was born in Kettering, Ohio on January 16, 1984 to Raymond “Bud” Thoma and the late Linda (Miller) Britton In July 2012, he married his wife Jodi C. (Morgan) Thoma in Franklin, Indiana; she survives along with their three beautiful children Reylynn Amelia, Spencer Raymond and Ephraim Dennis Thoma. Ray was an incredible father, husband and friend. His children and his wife were his whole world. Their faith was a cornerstone of their family. Ray was an avid fisherman and lover of all things nature and wildlife. Ray graduated high school in 2002 from Franklin Central High School and was working towards a college degree from the University of Phoenix and a future career in environmental science. Survivors include his wife, Jodi C. Thoma, their children Reylynn, Spencer, and Ephraim; father and step mother, Raymond “Bud” and Sharon Thoma of Arizona; two half-brothers, Tyler Britton and Travis Britton; and father and mother in-law, Dennis and Debbie Morgan of Lebanon. The family would also like to recognize Tanya and Keith Henthorn who were the co-parents of the Thoma children throughout Ray’s battle with Leukemia. Without their support and love this battle would have been much harder. Ray was incredibly grateful for their love and kindness, the opening of their hearts and home and their unwavering support and faith during a time that proved to be life changing for everyone. Ray was preceded in death by his mother Linda (Miller) Britton along with Jodi and Ray’s unborn child whom he is surely reunited with now. A Celebration of Life Service is planned for Sunday, March 17, 2019 at Southport Heights Christian Church, 7154 McFarland Rd, Southport, IN 46227 Visitation hours from 2:00-4:00 p.m. Service at 4:00 p.m. Memorial donations may be made to the family or may be directed in his memory to the Southport Heights Imagine Initiative to further the children’s ministry, as this was a passion of Ray’s

Mr. Raymond Anthony Thoma, 35, passed away Saturday morning, March 9, 2019 in his home in Greenwood, Indiana. Ray fought a long and fierce battle with leukemia and after 2 years he has gone home to our Father in Heaven. Ray was born in Kettering,... View Obituary & Service Information

The family of Raymond Anthony Thoma, III created this Life Tributes page to make it easy to share your memories.