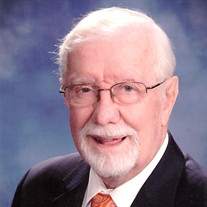 Richard “Dick” D. Bast passed away on Thursday, September 26, 2019 at the home of daughter, Kimberly Linton Martinez in Raeford, NC at the age of 90. His wife of 45 years, Marilyn and daughter were by his side. Dick was born in Tallula, IL on October 29, 1928, son of the late Jacob and Marie (Lenz) Bast. Dick was raised on a farm in rural Tallula and graduated from Petersburg Harris High School in Petersburg, IL. He was a graduate of Blackburn College in Carlinville, IL, 1948 with an associate’s degree and on to University of Illinois, Springfield, IL, 1951 with a Bachelor of Science degree in Agriculture Education. Dick taught vocational agriculture for 10 years at high schools in Indiana and Illinois, including Lebanon High School. He moved to Indianapolis and went to work in the heating and air conditioning business for Peerless Corp. He worked his way up from salesman to assistant general manager. Eventually, Dick returned to education and became Business Manager for the Western Boone School Corporation, also earning his Master’s Degree in Education Administration from Purdue University during this time. He also met his wife, Marilyn J. Kincaid Bast there. He married the love of his life, Marilyn, on June 15, 1974. Later, Dick became supervisor of Buildings and Grounds for Eagle Union School Corporation, Zionsville. Ultimately, Dick was working for the state of Indiana at the time of his retirement. During their 45 years of marriage, Dick and Marilyn enjoyed many places they travelled. They spent 18 years as “snow birds” in Brooksville, Florida at their second home “on golden pond” in the Wesleyan Village for 7 months of the year. When in the village, he and Marilyn volunteered for many activities and were honored as Volunteers of the Year. Dick was known for his infectious laugh and being very social. He never met a stranger. He always believed in serving, whether it was for the various churches he and Marilyn attended or for public organizations. He was a member of the Lebanon Presbyterian Church for many years and served as an elder as well as heading many committees. He participated in a small prayer group there as well. He was an advocate for sharing the Word of God and was a member of The Gideons International Organization. He served as Vice President for several years of the Brooksville, Florida district. He also was active in the Retired Teachers Organization, having served as President of both the Boone County and Brooksville, FL chapters. He volunteered for Boone County Meals on Wheels and was involved with the Boone County 4-H Program for many years. He was active with the Future Farmers of America (FFA) Organization during his teaching years. Survivors include: His loving and devoted wife; Marilyn; three daughters: Patricia Gillam, Westfield, IN, Pamela Drummond, Wylie, TX, and Kimberly Martinez, Raeford, NC; one son: Douglas Linton, Frankfort, IN; one sister: Patricia Birlingmair, Lexington, IL; six grandchildren: Nicholas Smith, Brenda and Melissa Gillam, Dewawn Wiest, Crystal and William Drummond; two great grandchildren: Braelyn and Donny Wiest. Along with his parents, preceding his death were: two daughters: Infant, Brenda Lynn Bast, and Carla Linton Anderson; one brother: Kenneth Bast. Visitation will be Saturday, October 5, 2019 from 11:00 am until 1:00 pm at Myers Mortuary in Lebanon, IN with services following at 1:00 p.m. Minister Steve Jaggers will be officiating. Dick will be laid to rest at Maple Lawn Cemetery in Thorntown following services. Memorial contributions may be made to The Gideons International, American Diabetes Association, or The Leukemia & Lymphoma Society.

Richard &#8220;Dick&#8221; D. Bast passed away on Thursday, September 26, 2019 at the home of daughter, Kimberly Linton Martinez in Raeford, NC at the age of 90. His wife of 45 years, Marilyn and daughter were by his side. Dick was born in... View Obituary & Service Information

The family of Richard D. Bast created this Life Tributes page to make it easy to share your memories.

Send flowers to the Bast family.