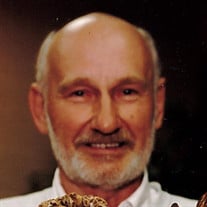 Richard Byron Clouser, 81, passed away on Sunday, April 21, 2019, at Signature Healthcare of Parkwood in Lebanon, Indiana. He was born in Boone County, Indiana, on March 29, 1938, to the late Daniel Byron and Evelyn Blanche (Thompson) Clouser. Richard graduated from Thorntown High School in 1957 and during his senior year in high school he joined the Indiana National Guard. He was married to Betty Joan (Martin) Clouser at Whitestown United Methodist Church on October 24, 1964; she survives. He was the plant manager in the Wastewater Department at Lebanon Utilities; retiring in 1998. Richard completed wastewater treatment classes at Ivy Tech and a class 3 certification from Indiana State Board of Health. He was always eager to learn and stayed up to date on current situations during his employment with the Lebanon Utilities. Richard had a love for antique and hot rod cars. He enjoyed building cars and racing which included, dirt track and demolition derbies. He was a member of Indiana Hot Rod Association, Goodguys Rod & Custom Association, and while employed was a member of Indiana Water Control Association. Survivors: Wife: Betty Joan Clouser – Whitestown, Indiana Three brothers: Buford Clouser – Lebanon, Indiana Kenneth Clouser – Thorntown, Indiana Harold Clouser – Thorntown, Indiana Sister-in-law: Carol Clouser – Lebanon, Indiana Several nieces and nephews In addition to his parents, Richard was preceded in death by two brothers, Daniel Clouser and Jack Clouser; and a sister-in-law, Jane Clouser. Funeral Services are planned for 1:00 p.m. on Saturday, April 27, 2019, at Myers Mortuary, 1502 North Lebanon Street, in Lebanon, Indiana. Visitation will be held from 9:00 a.m. until the time of service on Saturday at the funeral home in Lebanon. Interment will follow at Salem Cemetery in Zionsville, Indiana. Memorials may be made to the charity of the donor’s choice.

Richard Byron Clouser, 81, passed away on Sunday, April 21, 2019, at Signature Healthcare of Parkwood in Lebanon, Indiana. He was born in Boone County, Indiana, on March 29, 1938, to the late Daniel Byron and Evelyn Blanche (Thompson) Clouser.... View Obituary & Service Information

The family of Richard B. Clouser created this Life Tributes page to make it easy to share your memories.

Send flowers to the Clouser family.