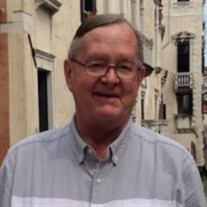 Richard Goodwin, 69, passed away at his home in Indianapolis on Saturday, April 11, 2020. He was born on February 12, 1951 in Lebanon, a son of the late James and B.J. Goodwin. He was a 1969 graduate of Lebanon High School, where he was an amateur athlete. Following high school, he graduated from Ball State University and also was on the football team during his time there. On March 14, 1987, he was married to Sherry (Gooding) Goodwin; they shared thirty-three loving years together and she survives. Richard owned and operated Sir Richard’s restaurant in Carmel, Indiana and the past ten years was a bartender at Beef & Board’s Dinner Theater. He enjoyed golf, sports of all kinds and working puzzles. Richard loved his family and adored his grandchildren. Survivors include his wife: Sherry Goodwin-Indianapolis, Indiana One Son: George Nicholas “Nick” Goodwin- Indianapolis, Indiana Brother: John (Cheri) Goodwin- Lebanon, Indiana Three Grandchildren: Nicholas Anthony Goodwin Audry Goodwin Adaline Goodwin In addition to his parents, he was preceded in death by a brother William R. “Billy” Goodwin. Private Family Funeral Services are planned for Wednesday, April 15, 2020, at Myers Mortuary, 1502 North Lebanon Street, Lebanon, Indiana. Interment will follow at Oak Hill Cemetery in Lebanon, Indiana. Memorials may be made to the Charity of the Donor’s Choice.

The family of Richard Goodwin created this Life Tributes page to make it easy to share your memories.

Richard Goodwin, 69, passed away at his home in Indianapolis...

Send flowers to the Goodwin family.