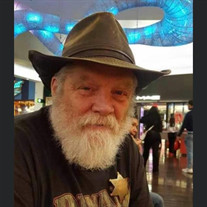 Robert "Bob" Dehn passed away at the age of 71 on March 16, 2021, with his wife Carmel by his side, at Mat-Su Regional Hospital in Palmer, Alaska. Born September 24, 1949 in Indianapolis, to George and Shirley (Williams) Dehn, Bob lived in South Bend until the age of 8, then moved to Lebanon, Indiana. Bob attended Lebanon High School and graduated from Ben Davis High School in 1968. He continued his education graduating from University of Alaska Cum Laude with an Electronics Technology degree in 1992. Bob was a talented musician and traveled extensively from 1970-1980 and pursued his craft of entertaining in the Mid-West. After his marriage to Carmel Alley on May 12, 1984 they lived in Dillon, SC for a short time before making their home in Wasilla, Alaska. February 1985, Bob was hired sight unseen as the Program Director for the new country radio station KNBZ 99.7 in Wasilla, Alaska. Bob helped the crew complete the build of the radio tower located off Schrock Road, created the country music play list and he was the morning D.J. As time moved on, Bob was then recruited by Northern TV in Anchorage. He was the General Manager for KBYR 700 AM Talk Radio Station and KNIK 105.3 FM “The Breeze” Jazz, Blues Radio Station. After commuting for 13 years, Bob had the opportunity to come back to the Valley in 2000. Returning to his roots, he worked for KMBQ 99.7 FM Radio Station (formerly known as KNBZ 99.7). Bob had two personalities during his radio career: Bob Dehn the radio manager and Dean Williams the on-air DJ. In 2006 Bob ended his radio career but was not ready to retire. A simple ad on the PW Hwy caught Bob’s eye, “Hiring Bus Drivers!” That ad launched his second career as a special education bus driver for First Student and the Mat-Su School District. From 2007 to 2021, Bob traveled over 150 miles every day transporting students to and from school. The joy of starting a student’s day with “Good Morning” and ending it by asking “how did it go?” gave such pleasure and satisfaction to Bob and the kids. Aside from music, other hobbies included tinkering on old Jeeps and small engines and motorcycle trips down the Alcan Highway through the "lower 48" to visit family and friends. Bob was preceded in death by his parents. He is survived by his wife, Carmel Dehn of Wasilla, AK, three daughters and their spouses, Kris &Troy Terrill of Lebanon, IN, Aubrey & Zach Saelens of Alexandria, VA and Calley & Matt Hall of Wasilla, AK. He leaves behind three grandchildren, Peyton, Luke and Ashlyn Terrill of Lebanon, IN. He is also survived by three sisters and their spouses, Cherie & Bob Donaldson of Lizton, IN, Barb & Frank Moore of Lebanon, IN and Beth & Scott Rutan of Indianapolis, IN. Surviving nephews include Clint Jones, Chris & wife Maria Jones of Lebanon, IN and Alex Rutan of Indianapolis, IN. In lieu of flowers, donations will be gratefully accepted to the “Bob Dehn Challenge Alaska Ski Trip Fund”. This fund will enable Mat-Su special needs students to access bus transportation for a yearly field trip to ski with an adaptive ski program at Alyeska Ski Resort. Bob loved “his” bus kids, and this will be a wonderful legacy from Bob to them. Please donate directly to: www.matsuk12.us/BobDehn, or checks can be made out to: “Mat-Su School District” with reference to Bob Dehn and mailed to Mat-Su School District, Attn: Carmel Dehn, 501 N Gulkana, Palmer, AK 99645. Memorial Service will be held at 2:00 p.m. on Tuesday, June 8, 2021, at St. Peter’s Episcopal Church, 950 East Washington St., Lebanon, Indiana. Visitation will be held from 12:00 p.m. noon until the time of service on June 8th at the church in Lebanon. Burial of Ashes will immediately follow services at Oak Hill Cemetery on June 8th. Myers Mortuary in Lebanon, Indiana is handling his local arrangements.

Robert "Bob" Dehn passed away at the age of 71 on March 16, 2021, with his wife Carmel by his side, at Mat-Su Regional Hospital in Palmer, Alaska. Born September 24, 1949 in Indianapolis, to George and Shirley (Williams) Dehn, Bob lived in... View Obituary & Service Information

The family of Robert "Bob" Dehn created this Life Tributes page to make it easy to share your memories.

Send flowers to the Dehn family.