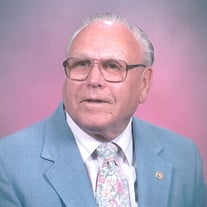 Robert Ores “Bob” Delong, son of the late Cecil Ores and Laura Francis (Abbitt) Delong, was reunited with his beloved Betty at the Gates of Heaven on September 15, 2019. He was 96 years old. Bob was born April 26, 1923 in Zionsville, Indiana, and graduated in 1941 from Zionsville High School. He proudly served his country during WWII in the United States Navy. Upon his return to Boone County, Bob began working in Indianapolis for Pitman-Moore, a division of Dow Chemical for 26 years then went to work for Rock Island Refinery. He worked there for 15 years before retiring in 1986. Bob held various memberships, including the First Community Church of Lebanon, American Legion Post 79 of Zionsville, Charles F. Frank Lodge # 760 of Zionsville, and was a 50 year member of the F&AM Lodge. He was formerly married to Mima Jean Allen and Joan M. Wyatt; both marriages ended in divorce. On March 23, 1973, he married Betty J. (Allen) Hickson Delong in Boone County. They were married for 41 years before she passed away on June 14, 2014. Bob was a fan of all sports and especially loved bowling and fishing. He was a lifelong fan of NASCAR and Indy Car Racing, and had a fond memory of taking a ladder to the infield at the dirt track as a youth. Having a passion for traveling, Bob had been to 48 states; all but Hawaii and California. His travels also took him overseas to Amsterdam, the Netherlands, and Paris. Although Bob never had any children of his own, he was blessed with many stepchildren, step-grandchildren and step-great grandchildren, as well as an abundance of wonderful friends. Bob will be missed by all that knew and loved him. He will be remembered for his sense of humor, giving nature, feisty personality, art of storytelling and zest for life. Funeral Services are planned for 11:00 a.m. on Friday, September 20, 2019 at Myers Mortuary, 1502 North Lebanon Street, in Lebanon, Indiana. Visitation from 9:00 a.m. until the time of service on Friday at the funeral home in Lebanon. Private Inurnment will be held at a later date at Mts. Runn Cemetery in Zionsville, Indiana. In lieu of flowers, memorials may be directed to the First Community Church, 701 North Lebanon Street, Lebanon, Indiana 46052 or to Boone County Senior Services, 515 Crown Pointe Drive, Lebanon, Indiana 46052. Myers Mortuary and Boone County Crematory have been entrusted with his care.

The family of Robert O. Delong created this Life Tributes page to make it easy to share your memories.

Send flowers to the Delong family.