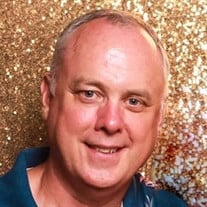 Robert William Hoffman, Jr., 63, formerly of Kokomo, Indiana passed away Saturday, July 18, 2020 at his home in Noblesville, Indiana. He was born March 17, 1957 in Lebanon, a son of the late Marjorie Frances (Peck) and Robert William Hoffman, Sr. On December 4, 1976, he was married to Carol Lynn (Webber) Hoffman in Zionsville; she survives. Raised in Lebanon, he was a 1975 graduate of Lebanon High School. Rob served his country for 32 years in the United States Air Force and was especially proud to have worked with the A-10 Thunderbolts. He retired with 41 total years of government service, spending the majority of his career as a radar technician at Grissom Air Reserve Base. He loved his family dearly and was known as “Pa Rob” by his grandkids. In addition, “Rob-Bob” was like a second father to all children at his wife’s daycare. Rob enjoyed coaching his sons and grandchildren in both Kokomo and Westfield and he loved working on cars in his free time. He had attended St. Joan of Arc Catholic Church and was a member of the Lions Club while living in Kokomo. Survivors include his wife: Carol Hoffman of Noblesville; three sons: Jason (Melissa) Hoffman of Westfield, Jeff (Kate) Hoffman of Noblesville, and Shawn (Madison) Hoffman of Palo Alto, California; five grandchildren: Ellie, Graham, Dexter, Sam, and Chase; brother: Rick (Jennifer) Hoffman of Chicago, Illinois; sisters: Linda Hoffman of Indianapolis, Suzan (Brent) Hussong of Chicago, Illinois, Marilyn Hoffman of Lebanon, Carolyn (David) Miller of Lebanon, Jody (Larry) Christiansen of Modesto, California, Pam (Steve) Taylor of Jamestown, and Stephanie (Chuck) Hunt of Lebanon; and several nieces and nephews. In addition to his parents, Rob was preceded in death by a sister, Julia Ellis. A casual “come as you are” visitation will be held from 2:00 to 5:00 p.m. on Sunday, July 26, 2020; at Myers Mortuary, 1502 North Lebanon Street, in Lebanon. Due to the current nationwide pandemic, the family is hosting a dedicated visitation for the immunocompromised from 1:00 to 2:00 p.m. prior to the public visitation. A casual “come as you are” Funeral Mass will take place at 10:00 a.m. on Monday, July 27, 2020 at St. Joseph Roman Catholic Church, 309 East South Street, in Lebanon. Interment with military rites will follow services at St. Joseph Cemetery in Lebanon, Indiana. In lieu of flowers, the family asks that donations be made, in Rob’s memory, to the IU Health Lung Transplant program. Rob deeply appreciated that this program provided others the means to the same opportunities he had. Memorial envelopes will be available at the viewing. Donations can also be made online via: https://www.iuhealthfoundation.org/donate/iu-health-methodist-hospital: Designation: Other: Other Designation: Care of Lung Transplant Program: This gift is in memory of Rob Hoffman.

The family of Robert W. Hoffman Jr. created this Life Tributes page to make it easy to share your memories.

Send flowers to the Hoffman family.