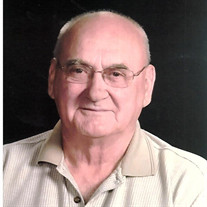 Mr. Ronald Lee Wright, 76, passed away Monday, December 28, 2020 at Witham Memorial Hospital in Lebanon, Indiana. He was born in Somerset, Kentucky on March 12, 1944; a son of the late Oscar L. and Orpha M. (Howell) Wright. He attended schools in Somerset, Kentucky. Ronald served his country honorably in the U.S. Army. On February 19, 1966 he was married to Reba M. (Lakes) Wright; she survives. Ronald was an over-the-road truck driver for many years. He also worked for Lebanon Concrete and was a talented diesel mechanic. Following retirement, he enjoyed working part-time at Menards in Lebanon. He was past member of the American Legion and attended Hope Community Church. Ronald enjoyed doing home improvements and mowing his yard. He was devoted and loved his family. Survivors include his wife: Reba Wright of Lebanon; children: Ricky N. (Kelley) Wright of Lebanon, Reneé L. (Jeff) Isenhower of Lebanon; five grandchildren, Chase Wright, Cade Wright, Peyton Isenhower, Quintin Isenhower, Braylon Isenhower; brothers, Luther “L.V.” Wright of Lebanon, Vern Wright of Kentucky; sisters, Hazel Flannagan of Maryland, Delatha Wright of Kentucky, Sue Curtis of Kentucky, Caroline Turner of Washington. In addition to his parents, Ronald was preceded in death by a son, Rodney L. Wright and a brother, Donald Wright. Visitation will be held on Monday, January 4, 2021 from 9:00 to 11:00 a.m., at Myers Mortuary, 1502 North Lebanon Street, in Lebanon, Indiana. Funeral Services are planned for 11:00 a.m. on January 4 at the funeral home in Lebanon. Visitors are asked to follow the CDC guidelines, please wear a mask and practice social distancing. Due to the current pandemic, Services can be viewed by the public on the Myers Mortuary Facebook page beginning at 11:00 a.m. on January 4th. Interment will follow services at Oak Hill Cemetery in Lebanon, Indiana. Memorials may be made to the charity of the donor’s choice.

The family of Ronald L. Wright created this Life Tributes page to make it easy to share your memories.

Send flowers to the Wright family.