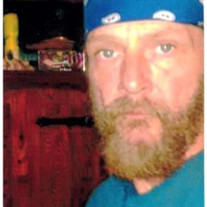 Richard Samuel Strunk, 60, passed away Sunday, January 9, 2022, at his home in Thorntown, Indiana. He was born on January 1, 1962, in Noble County, Indiana, a son of the late James Atlas and Norma Jean (Cassidy) Strunk. On March 26, 1996, he was married to Cora Lee (Sanders) Strunk in Thorntown, Indiana; she survives. Sam attended schools in the Indianapolis area. He worked as an iron worker for New Core Steel in Crawfordsville and drove a truck for Ryder. He loved being around his family and animals. Survivors include his wife, Cora L. Strunk of Thorntown; five children, James (Tiffany) Strunk of Alabama, Jerusha Amber Hope of Thorntown, Norma Kay “Poppy” (Brandon) Bray of Frankfort, Samantha (Jacob) Fahenstock of Kokomo, and Josh (Sandra Dukes) Sanders of Lebanon; fourteen grandchildren; two great grandchildren; and two sisters, Norma Moore of Thorntown and Sue (Mike) Pietro of Indianapolis. In addition to his parents, Sam was preceded in death by a daughter, Roseanne Jean Smith; and stillborn granddaughter, Maylynn Nicole Shrock. Funeral Services are planned for 12:00 noon on Friday, January 14, 2022, at Myers Mortuary, 1502 North Lebanon Street, in Lebanon, Indiana, with visitation from 10:00 a.m. until the time of services. Boone County Crematory has been entrusted with his cremation following services. Memorials may be made in Richard’s memory to the Boone County Cancer Society, 117 West Elm Street, Lebanon, IN 46052.

The family of Sam Strunk created this Life Tributes page to make it easy to share your memories.

Send flowers to the Strunk family.