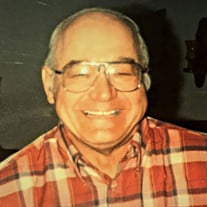 Samuel Robert “Sam Bob” Miller, 88, entered his eternal rest on February 12, 2020, after battling various cancers for over 30 years at his home in Advance. He wasn’t about to let the cancer win and ultimately it was likely a heart attack that took him from us. Sam was born on February 1,1932 in Boone County to Russell and Mabel Miller. He learned the value of hard work while growing up on the farm. He never complained about doing physical labor, always willing to help anyone in need. He graduated from Ben Davis High School then went into the Army during the Korean Conflict. He married Joyce Arlene Lawton on June 30, 1951 in her childhood home in Ladoga, IN. The couple were blessed with five children, 11 grandchildren and 15 great grandchildren. Sam never met a stranger, just someone waiting to be regaled with his stories. He loved people and wanted to know them better, however silence was never his friend. Dairy, hog and crop farming (corn, beans, tomatoes and cucumbers), preaching and construction equipment maintenance were his family’s livelihood. He enjoyed working with others, especially farming with the help of his son, Larry. The other four children never quite embraced the farm labor with the same enthusiasm. Sam became a Christian when he was a teenager. He was a devoted member of the Gadsden Church of Christ for over 50 years and served as an elder in the congregation for several decades. He was also a part time itinerant preacher throughout central Indiana and Illinois in his early years. Sam was preceded in death by his wife of 68 years Joyce, parents, Russell and Mabel (Rodgers) Miller, brothers, H.R., John Otto, Jack, Billy and sister Helen Mabel and great-granddaughter, Dixie Rose. Survivors include children, Dennis Miller and wife Sheri (Colleyville, TX), Deanna Miller (Advance), Larry Miller and wife Fran (Thorntown), Linda Ranney and husband Todd (Advance), and Alan Miller and wife Brenda (Lebanon area); grandchildren, Michael Miller, Kacie Miller, Amber Williford, Dustin Miller, Jeffrey Miller, Austin Ranney, Samantha Foy, Joel Ranney, Tristin Miller, Jenna Miller and Elijah Miller; sister-in-law Juanita (Jack) Miller, along with many nieces and nephews. Visitation will be from 2-5pm on Tuesday, February 25 at Myers Mortuary, 1502 North Lebanon Street in Lebanon, Indiana with a memorial service following at 5:00pm, at the funeral home in Lebanon. In lieu of flowers donations can be sent to Boone County 4-H for a picnic table in his name. Inurnment of ashes are planned for a later date at Pleasant View Cemetery

The family of Samuel 'Sam Bob' Robert Miller created this Life Tributes page to make it easy to share your memories.