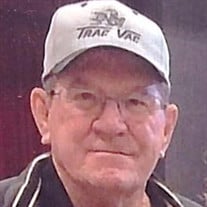 Stanley Gordon Morton, 77, passed away peacefully on Saturday, July 10, 2021, at Homewood Health Campus in Lebanon, Indiana. He was born in Salem, Illinois on August 28, 1943, a son of the late Willard E. and Ann E. (Fenner) Morton. He was a 1961 graduate of Salem High School in Salem, Illinois and a 1966 graduate of Purdue University with a degree in Agricultural Engineering. On October 11, 1969, he married Karen (Seiler) Smock Morton in St. Louis, Missouri; she survives. Stanley established Palmor Products, Inc., in 1975; a lawn and garden manufacturing plant in Thorntown, Indiana, where he was also owner and manager. He was a member of the American Legion, Elks and the Eagles all in Lebanon. He also was a member of the John Purdue Club, where he was a loyal basketball and football season ticket holder. Stanley loved his family immensely and cherished all their outings. In addition to being with family, he enjoyed golf, motorcycle riding and NASCAR. Vacationing in the Grand Cayman Islands twice a year for over forty years with his wife was a favorite get-away of his to relax and unwind. He leaves behind his wife of 51 years, Karen Morton of Lebanon; daughter, Deborah M. (Jason) Crum of Lebanon; son, James F. (Yaya) Smock of Lexington, Kentucky; four grandchildren, Alexandra Smock of Indianapolis, Nicholette (Mike) Myers of Indianapolis, Brittney Crum of Lebanon and Brayden Crum of Lebanon. In addition to his parents, Stanley was preceded in death by two sisters, Nadine Lehman and Gail Morton. Funeral Services will be held at 2:00 p.m. on Friday, July 16, 2021, at Myers Mortuary, 1502 North Lebanon Street in Lebanon. Visitation is planned from noon until the time of service on Friday, July 16, 2021, at the funeral home in Lebanon. Interment will follow services at Oak Hill Cemetery in Lebanon, Indiana. Memorials in Stanley’s memory may be directed to Boone County Cancer Society, 117 West Elm Street, Lebanon, Indiana 46052 or Boone County Life Pregnancy Center, 1208 North Lebanon Street, Lebanon, Indiana 46052.

Stanley Gordon Morton, 77, passed away peacefully on Saturday, July 10, 2021, at Homewood Health Campus in Lebanon, Indiana. He was born in Salem, Illinois on August 28, 1943, a son of the late Willard E. and Ann E. (Fenner) Morton. He was... View Obituary & Service Information

The family of Stanley G. Morton created this Life Tributes page to make it easy to share your memories.

Send flowers to the Morton family.