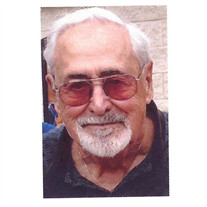 Stephen L Gebbia, 89, died peacefully after a long, full life. Steve was a devout Catholic, who believed in family and a good education. A descendant of Sicilian immigrants, he and his sister, the late Frances (Jerry) Roethle, were born and raised in Rockford Illinois, by their parents Fred and Frances (Palmeri). Steve left Rockford at the age of 16 to attend Purdue University, where he earned a B.S. in Mechanical Engineering. He then earned an MBA in Industrial Management from DePaul University. Immediately after graduating, his Korean War draft deferment ended and he was assigned to serve in the Army Chemical Center at Edgewood Arsenal in Maryland, where he met his wife of 65 years, Doris. After the war, they married and moved to Chicago, where Steve started his long career in the steel forging industry, first with Taylor Forge, then as plant manager at A. Finkl & Sons. Steve and Doris married in April 1955 and soon after, started their large family of 8 children, 16 grandchildren, and 5 great-grandchildren. Steve’s loving family includes Vicki; Frederic (Joan) and their son Nick; Karen and her children Ben, Rafaella and Luca; the late Stephen L Gebbia who passed away in October 2019; Doris (John) and their sons Kyle, Tom (Ashley), and Dan; Mary (Ozzie) and their children Kate (Keith), Keli (Marc) and their sons Taro and Mark, Carrie (DJ) and their children Sydney and Emery, Matt (Stephanie) and their son Yasuaki, and Samantha; Paul (Erica) and their daughters Atalie and Havah; and Charles (Debbie) and his children Anthony and Veronica. After Steve retired, he and Doris moved to Lebanon, Indiana, where they have lived, and made numerous friends, for more than 20 years. A Funeral Mass will be held at 11:00 a.m. on Saturday, November 7, 2020 at St. Joseph Roman Catholic Church, 319 East South Street, in Lebanon, Indiana. The family kindly asks for attendees to follow the CDC guidelines, please wear masks and social distance. Myers Mortuary and Boone County Crematory have been entrusted with his care. Memorials may be given in his memory to St. Vincent de Paul.

Stephen L Gebbia, 89, died peacefully after a long, full life. Steve was a devout Catholic, who believed in family and a good education. A descendant of Sicilian immigrants, he and his sister, the late Frances (Jerry) Roethle, were born and... View Obituary & Service Information

The family of Stephen L. Gebbia created this Life Tributes page to make it easy to share your memories.

Send flowers to the Gebbia family.