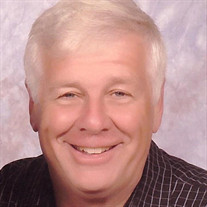 Mr. Robert Stephen “Steve” Wilhoite, 70, passed away on Thursday, October 21, 2021 at Witham Memorial Hospital in Lebanon, Indiana. He was born in Lebanon, Indiana on May 17, 1951; a son of the late Byron W. and Helen I. (Shockley) Wilhoite. He was a 1969 graduate of Lebanon High School. On June 5, 1971 at Walnut Street Baptist Church in Lebanon, he was married to Debbie J. (Hinton) Wilhoite; she survives and they recently celebrated 50 wonderful years together. Steve was employed with the Lebanon Utilities as a meter technician for many years before retiring in 2017. He was a faithful member of Lighthouse Baptist Church in Lebanon. Steve enjoyed helping at the church whenever there was a need, working on garden tractors and collecting toy tractors. He was a good friend to many, a loving husband, father and grandfather who will be greatly missed. Survivors include his wife: Debbie Wilhoite of Lebanon; two daughters, Amy (Marty) Padgett of Hillsboro, Indiana, Alyssa (Wesley) Harville of Winchester, Kentucky; five grandchildren, Makenzie Harville, Ashley Padgett, Khloe Harville, Brayden Harville, Autumn Padgett; three brothers, Paul David Wilhoite of Lebanon, Dennis (Deb) Wilhoite of Lebanon and Russell Lee (Marianne) Wilhoite of New Castle, Indiana along with several cousins, nieces and nephews. In addition to his parents, Steve was preceded in death by a brother, Dale Wilhoite. Funeral Services are planned for 2:00 p.m. on Tuesday, October 26, 2021, at Myers Mortuary, 1502 North Lebanon Street in Lebanon, Indiana. Visitation will be held from 12:00 p.m. noon until the time of service on Tuesday at the funeral home in Lebanon. Interment will follow services at Old Union Cemetery in Lebanon. Memorials may be made in his honor to Lighthouse Baptist Church, 858 West 250 North, Lebanon, Indiana 46052.

The family of Steve Wilhoite created this Life Tributes page to make it easy to share your memories.

Send flowers to the Wilhoite family.