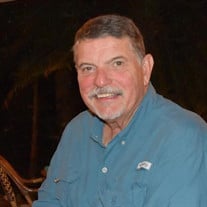 Steven J. Jacob, passed away peacefully Wednesday and, despite the pandemic, was surrounded by his family, within the hour of celebrating his 74th birthday. Steve is survived by his wife, Janet Green Jacob and their three children Jeff Jacob (wife Susan), Jill Jacob (husband Donnie Mortimer), and Chris Jacob. He also has four adoring grandsons Will, Cole, Jake & Henry (one of whom won the very last game of ‘gotcha-last’ with their Papa). Also of note is his former son-in-love and still very much fr-amily, Jim Guggenhime. He was born (March 16, 1947) and raised by hard-working parents (William and Marietta) on their self-made family farm in Jasonville, where Steve honed his Hoosier basketball skills in the hay loft on a bent rim without a backboard (he holds several Shakamak High School records to this day). Steve left the farm for Purdue University (BS) as the first in the family to attend college. The debate remains today over whether Janet spilling acid on Steve’s shirt in chemistry class was accidental or a complex and reckless, but oddly successful, ploy to get his phone number. Either way, the pair graduated, and the farm-kid from southern Indiana worked his way up through the ranks of Indiana Bell to a vice-president of Ameritech. Notably, Steve was awarded a Congressional fellowship served in Washington, DC lobbying for the telecom industry. Steve finished his career in the private sector at Woolpert Engineering and Time Warner Telecom. While Steve was a talented and skilled woodworker and avid bird watcher, his real passion was fishing for walleye at Dogtooth Lake in Ontario, Canada and his self-stocked pond at his home in Whitestown. Steve passed his love of the outdoors on to his children and in turn to his children’s children. Steve is perhaps best known recently for his years of dedicated public service leadership. He served on the Boone County Council (20+ years) and for a number of years through current as its president; Chairman of the Boone County Convention & Visitors Bureau; past member and vice-chairman of the Boone County Republican Central Committee; past member of the Boone EDC, just to name a few that allowed him through his dedication, fairness, and hard work to make Boone County a better place for it. Steve drew inspiration to serve from his much admired father-in-law Paul Green who also served as president of the Boone County Council for untold years; Paul also followed in the footsteps of his father-in-law, Ollie Berry also serving in the same seat and role. Steve will be missed by those closest to him for what he is best known for, a passionate and deep dedication to his family and community. An informal, outdoor visitation (just the way Steve would like it) will be held Monday March 22, 2021 from 1:00 pm to 4:00 pm at Steve & Janet’s home in Whitestown, 5236 E. 200 S. Sadly for the hugs and handshakes, we note that the current CDC guidelines will apply and masks should be worn. And, for those that would prefer to avoid gatherings, you are welcome to drive through the property, honk and wave. Last, Myers Mortuary will have periodic live streams on Myers Mortuary Facebook page. Online condolences: www.myersmortuary.com.

Steven J. Jacob, passed away peacefully Wednesday and, despite the pandemic, was surrounded by his family, within the hour of celebrating his 74th birthday. Steve is survived by his wife, Janet Green Jacob and their three children Jeff Jacob... View Obituary & Service Information

Send flowers to the Jacob family.