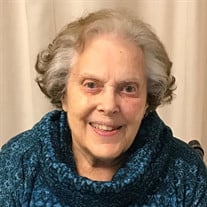 Susanne Elizabeth (Winkler) Kettelhut, 87, was embraced by the angels in the first hour of February 21, 2020. The eldest of the Winkler triplets, she and her sisters were born in St. Vincent’s Hospital in Indianapolis to Herman and Gertrude (Fleury) Winkler on August 17, 1932. She attended Lebanon public schools and Indiana University in Bloomington, earning a B.A. in Education in 1954. After briefly teaching elementary school, she married Karl “Pete” Kettelhut on December 29, 1954. Together they had five rambunctious children -- Karen (David) Reifler, Kurt (Mary Ellen) Kettelhut, Eric (Louisa) Kettelhut, Ann (David) Noe, and Mark (Nina) Kettelhut -- raised in West Lafayette, Indiana, and East Grand Rapids, Michigan. She was active in assisting with the Girl Scouts, Cub Scouts, and her sororities Delta Zeta and Tri Kappa. She greatly enjoyed and was very proud of her twenty-five years of volunteering at The Children’s Museum of Indianapolis with her sister Sally. After residing in the Indianapolis area for over thirty-two years, Sue and Pete moved to Grand Rapids, Michigan, to be closer to children and grandchildren. In addition to world travel with her husband, Sue loved all types of handicrafts, especially holiday ornaments. Friends and staff remember her for her sweet nature. She is survived by her husband of sixty-five years, her triplet sisters Mary Brennan and Sally Green and their families, her five children, and twelve grandchildren — Karl and Sarah Kettelhut; Ryan, Connor, and Kara Genther; Kara, Kelsey, Molly, Elisa and Anabelle Kettelhut; Jane and Henry Kettelhut — who remember her for her sweet love and her delicious chocolate chip oatmeal cookies. Funeral services are scheduled for 10:30 a.m. on Monday, March 2, 2020, at St. Elizabeth Seton Catholic Church, 10655 Haverstick Road, Carmel, Indiana 46033, with visitation beginning at 9:00 a.m. A private entombment will follow services at Oak Hill Cemetery in Lebanon, Indiana. Donations in memory of Susanne Kettelhut may be made to the Children’s Museum of Indianapolis or the Alzheimer’s Association.

Susanne Elizabeth (Winkler) Kettelhut, 87, was embraced by the angels in the first hour of February 21, 2020. The eldest of the Winkler triplets, she and her sisters were born in St. Vincent&#8217;s Hospital in Indianapolis to Herman and Gertrude... View Obituary & Service Information

The family of Susanne Elizabeth (Winkler) Kettelhut created this Life Tributes page to make it easy to share your memories.

Susanne Elizabeth (Winkler) Kettelhut, 87, was embraced by the...