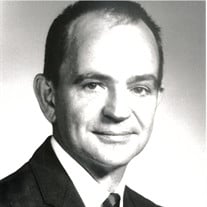 Thomas L. Bryant, 93, of formerly of Williston, Florida, passed away Tuesday, August 18, 2020, at Decatur Township Care and Rehabilitation Center in Indianapolis, Indiana. He was born February 15, 1927 in Greene County, Indiana; a son of the late Charles and Ivy (Pritchard) Bryant. He graduated from high school in Linton, Indiana. Following high school, he served his country honorably in the U.S. Navy during WWII. Thomas was married to Mable L. (Brim) Bryant and she preceded him in death on November 26, 2017. He was a skilled electronics specialist where he was a dedicated employee with Control Data in Indianapolis. He was a proud member of the VFW in Mooresville and the American Legion in Indianapolis. Thomas was a wonderful husband, father and grandfather who worked hard and enjoyed golfing in his spare time. Survivors include: Son: Charles (Diana) Bryant of Indianapolis Daughters: Linda (Doug) Cantrell of Indianapolis Robin Marcum of Indianapolis Seven Grandchildren: Curtis, Thomas, Johnny, Mary, Joe, Kevin, Keith Numerous Great Grandchildren and Several Great-Great Grandchildren Siblings: Med, Mackie, Ray, Rita In addition to his parents and wife,Thomas was preceded in death by two brothers, Walter and Dwight and three sisters, Phyllis, Judy and Mary. Graveside Services with Military Rites are planned for 11:00 a.m. on Saturday, August 22, 2020 at Lincoln Memory Gardens in Whitestown, Indiana with Chaplain Charles Sawyer officiating. Myers Mortuary in Lebanon, Indiana will be handling his arrangements. In lieu of flowers, memorials may be given to the charity of the donor’s choice.

Thomas L. Bryant, 93, of formerly of Williston, Florida, passed away Tuesday, August 18, 2020, at Decatur Township Care and Rehabilitation Center in Indianapolis, Indiana. He was born February 15, 1927 in Greene County, Indiana; a son of the... View Obituary & Service Information

The family of Thomas L Bryant created this Life Tributes page to make it easy to share your memories.

Send flowers to the Bryant family.