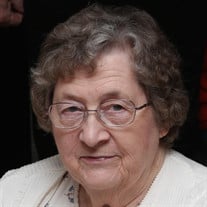 Wilda Agnes Boyd, 91, of Lebanon, Indiana slipped away peacefully on May 17, 2020 at Witham Memorial Hospital. She was born in a farm home near Dresden, Kansas on May 15, 1929, the first of four children born to John Henry Oliver and Vera Agnes (Ocobock) Oliver. Her family moved to Colorado when her father answered his call to be a minister in the Evangelical Friends (“Quaker”) Church in the Colorado towns of Vilas, Center, and Penrose. She graduated from Penrose High School in 1947. After working a few years, she enrolled in Friends Bible College (now Barclay College) in Haviland, Kansas. There she met Joe Boyd of Alvin, Texas; they were married in Penrose, Colorado on August 19, 1953. Her minister father officiated. Wilda and Joe lived in Wichita, Kansas during their first year of marriage. They then lived for fifteen years in Belleville, Kansas where Joe had a dual career as pastor of the Friends Church and as a teacher in the public schools. Their three children were born in Belleville. Wilda was a true helpmeet in their church work and she often helped other families in various ways including child care. When Joe’s first administrative position took them to Shallow Water, Kansas for five years, Wilda was the school secretary. After that, they moved to WaKeeney, Kansas where they lived until retirement and beyond. They moved to Indiana in 2006. Wilda was a skilled office worker and held several such positions through the years, eventually retiring after ten years as manager of a city-owned senior housing complex in WaKeeney. But she always believed being a loving wife, mother, and homemaker was her highest calling. She was approachable, showing tremendous compassion toward people who shared confidences regarding the struggles in their own lives. In addition to her husband Joe, Wilda is survived by their two sons and a daughter: Paul and wife Paula of Derby, Kansas; David and wife Suzanne of Greeley and Denver, Colorado; and Joyce Scott and husband Rick of Lebanon, Indiana. Their seven grandchildren are Alex Boyd and wife Alisha of Ogden, Utah; Becky Johnson and husband Danny of Waverly, Iowa; Hannah Boyd of Seattle, Washington; Christina Shouse and husband Tim of Lebanon, Indiana; Chelsey Phillips and husband Todd of Lebanon, Indiana; Stephanie Venis and husband David of Tuscola, Illinois; and Stacie Scott of Lebanon, Indiana. They also have ten great-grandchildren. Other survivors include her two sisters, Lois Frank and Mary Morton (special friend Carl Leatherbery), and a sister-in-law, Jeanne Oliver, all of Colorado. Her parents and her brother Edgar Oliver preceded her in death, as did her brother-in-law Keith Frank. No formal funeral services are planned for Wilda. Her cremated remains will be interred at Brown’s Wonder Cemetery near Lebanon. The family will gather later for a time of remembrance. Memorial gifts to Barclay College, 607 North Kingman, Haviland, Kansas 67059 would be appropriate and greatly appreciated. Myers Mortuary and Boone County Crematory have been entrusted with her cremation arrangements. Online Condolences: www.MyersMortuary.com.

Wilda Agnes Boyd, 91, of Lebanon, Indiana slipped away peacefully on May 17, 2020 at Witham Memorial Hospital. She was born in a farm home near Dresden, Kansas on May 15, 1929, the first of four children born to John Henry Oliver and Vera Agnes... View Obituary & Service Information

The family of Wilda Agnes Boyd created this Life Tributes page to make it easy to share your memories.

Send flowers to the Boyd family.