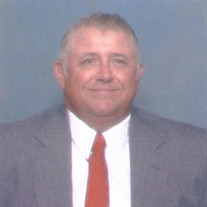 Wilford Blaine “Bill” Boyland, 78, passed away Monday night, November 9, 2020 at his home in Lebanon, Indiana. He was born in Lebanon on April 25, 1942, a son of the late Otis Wilford and Mary Frances (Smith) Boyland. On October 25, 1963, he was married to Judy Ellen (McDonald) Boyland at the First Baptist Church in Lebanon; she survives. A lifelong resident of Lebanon, Bill was a 1960 graduate of Lebanon High School. He graduated from Ohio State University with a degree in Metal Engineering. Bill worked for General Motors, Gas Turbines Division, for 31 years as a Senior Engineer and then went to work for Rolls-Royce Corporation for seven years before retiring. He also served 23 years in the Indiana National Guard and retired as an E-8. He was active in the Lebanon community. Bill and Lonnie Workman built and installed the first basketball goals at the Lebanon Boys & Girls Club. He served as Past President of the Indiana Chapter of American Society of Metals, Past Exalted Ruler of the Elks Lodge # 635, a member of the American Legion Post 113, a past member of the Moose Lodge # 1269, and a past member of the pool leagues at Allison Transmission and the Moose Lodge. Having had a passion for racing, Bill raced B1 Modified Stock called the “White Knight”. In addition, he and his wife travelled extensively. Survivors include his wife, Judy Boyland of Lebanon Two Children: Blaine Eric (Amy) Boyland of Lebanon Jennifer Annette Creasey of Lebanon Three Grandchildren: Ashley (Pooke) Parker of Lebanon Geneva Creasey of Lebanon Alisha Boyland of St. Louis, Missouri One Great Granddaughter: Axel Vivian Parker Brother: Gary L. (Donna) Boyland of Lebanon In addition to his parents, Bill was preceded in death by a son, Blaine Aaron Boyland, and a granddaughter, Gabrielle Adeline Hill. Private Family Services with Elks Rites will be held at Myers Mortuary, 1502 North Lebanon Street, in Lebanon, Indiana. Boone County Crematory has been entrusted with his cremation arrangements following services with burial of ashes at a later date at Oak Hill Cemetery in Lebanon. The family would like to extend a special thank you to his care givers, Judy Barrier, who affectionately called him “My Buddy”, and Julia Wilkosz .

The family of Wilford "Bill" B. Boyland created this Life Tributes page to make it easy to share your memories.

Send flowers to the Boyland family.