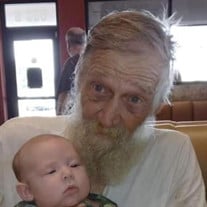 William Benjamin Griffin, 68, of Rossville, Indiana, passed away unexpectedly on Friday, October 8, 2021, at his sister’s home in Decatur County, Indiana. He was born in Crawfordsville, Indiana, on April 7, 1953, a son of the late Joseph and Clara Geneva (Ritter) Griffin. On October 29, 1981, he was married to Julie (Ford) Griffin in Lebanon. She passed away September 16, 1988. Bill was a 1973 graduate of Granville Wells High School. Following school, he served his country honorably in the United States Army and retired with the Indiana National Guard. Bill worked in construction, building grain bins for many years. He loved the outdoors. He enjoyed hiking, fishing, and playing around with his dogs, Maggie and Snoop. Above all, Bill loved his family. Survivors include, his son, Ben (Mariah “Josie” Hopkins) Griffin of Rossville; three grandchildren, Damien, Lilly, and James Hudson Griffin; two brothers, James Ritter of Lebanon and Bobbie Griffin of Duluth, Georgia; five sisters, Dorothy Guthrie of Illinois, Clara Eakle of Lebanon, Kathy (Mike) Muller of Jamestown, Sandy (Terry) Hitchel of Westport, Indiana, Bea McCoy of Lebanon; sister-in-law, Anna Lee Griffin of Waynesburg, Kentucky; and several nieces and nephews. In addition to his parents and his wife, Bill was preceded in death by a brother, Johnnie Griffin; and brothers-in-law, Mike Guthrie, Ralph Eakle and Lowell McCoy. Funeral Services with military rites are planned for 1:00 p.m. on Wednesday, October 13, 2021, at Myers Mortuary, 1502 North Lebanon Street, in Lebanon, Indiana. Visitation will be held from 10:00 a.m. until the time of service at the funeral home in Lebanon. Interment will follow services at Lincoln Memory Gardens in Whitestown, Indiana.

William Benjamin Griffin, 68, of Rossville, Indiana, passed away unexpectedly on Friday, October 8, 2021, at his sister&#8217;s home in Decatur County, Indiana. He was born in Crawfordsville, Indiana, on April 7, 1953, a son of the late Joseph... View Obituary & Service Information

The family of William "Bill" Griffin created this Life Tributes page to make it easy to share your memories.

Send flowers to the Griffin family.